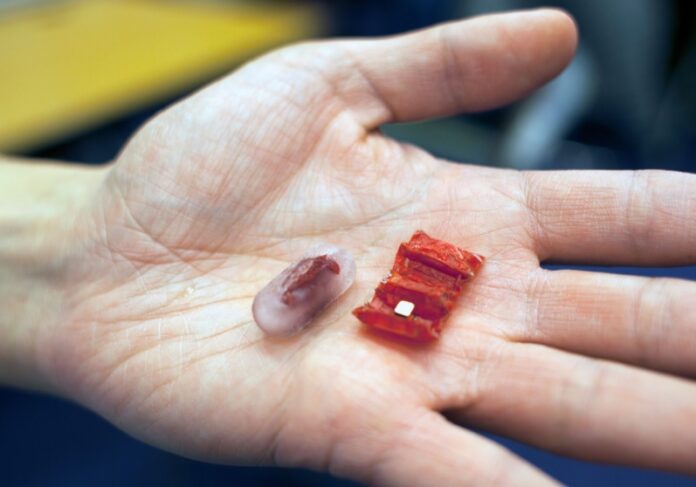 Gastrointestinal (GI) diseases in the small intestine and colon are incredibly harmful to the public’s health. Colorectal cancer (CRC) is the third-highest among all cancers. It claimed 774,000 lives in 2015. However, if it can be detected early and treated promptly, the survival rate could increase by up to 94%.

Conventional endoscopes with cables are the most common tool used in examinations, but often bring pain to the patient. Moreover, this requires narcotic drugs, which may be risky for the patient.

In recent years, robot-assisted colonoscopy and micro-robots in the GI tract have made significant progress that includes capsule robots (CR) that can be introduced from the mouth/anus and can move actively in the gastrointestinal tract, offering a non-invasive diagnosis and treatment for GI diseases.

A breakthrough in therapeutic medical technology and interventional therapy, the capsule robot acts as a smart micro-tool that causes minimal stimulation and damage to the body.

When it enters into the GI tract, it can photograph organs such as the esophagus, stomach, small intestine, and large intestine, thus helping doctors diagnose patients. Compared to traditional endoscopes, capsule endoscopes offer a non-invasive solution, have broad application prospects, and avoid pain.

A brief history of capsule robots

The capsule robot was a fictional idea until it turned into reality in the 1950s because of miniaturized components. When the first wireless-capsule was developed, it had minimal capabilities. It could measure a few physiological parameters of the GI tract, such as pH, temperature, and pressure. Known as an endoradiosonder or “radio pill,” this capsule was a tiny, swallowable transmitter with sensors.

Heidelberg Medical in Germany first developed the pH parameter capsule system. This capsule, which was 15.4 mm long and 7.1 mm in diameter, had a battery with six-hours long life, a radio frequency transmitter, and an electrode. The capsule was used for diagnosing hypochlorhydria and achlorhydria.

In 1981, Iddan developed the concept of wireless video capsule endoscopy to see the GI tract wall painlessly, but the technology was not enough to materialize the concept. Fourteen years later, in 1997, Swain developed several prototypes of a capsule endoscopy system and conducted numerous experiments on postmortem and live pigs.

In the same year, Given Imaging also announced the first clinical product, M2A (mouth to anus), to examine the small bowel. Later, the company launched its esophagus-specific and colon-specific capsules – PillCam ESo and PillCam Colon, respectively. In addition to Given Imaging, Jinshan (China), Olympus (Japan), and IntroMedic (Korea) made significant improvements in the performances of their endoscopic capsules.

Even so, all of the capsules moved through the GI tract by the natural motility of the tract itself. There was no control of the capsules’ movements or camera orientation, limiting the accuracy of medical diagnoses. Apart from this, the poor image resolution and low frame rate confine the broader application of the capsules. Overcoming these limitations and developing the next-gen capsules with enhanced functionality and control are the present research objectives.

A typical capsule robot consists of the following parts:

The active movement of the CR is typically implemented in two ways. The first one exploits a magnetic interaction between a permanent magnet onboard the CR and an external controllable magnetic field. In contrast, the second employs a couple of mechanisms driven by actuators.

Magnetic interaction is the most widely studied method for wireless-capsule robots. The human body’s magnetic permeability is almost the same as that of air, and the distribution of the static magnetic field is unaffected by human tissue.

The magnetic-type CR is further classified into two subtypes of magnetic-traction and magnetic-rotation. The former features a 3-D motion and has been successfully used for stomach inspection. The latter aims to explore the colon based on multiple wedge effects and has shown good movement velocity (14.4 to 72 cm/min).

However, the traction force generated by the magnetic interaction usually is less than 300 mN, which is not sufficient to overcome the friction. Therefore, to reduce the friction, the stomach/colon must be filled with liquid.

The actuators-driven CR has a large traction force and can be directly used to explore the colon. The actuator-driven CR has three capabilities to achieve a high-quality exploration comparable to traditional colonoscopy:

An inchworm-like CR (ILCR) is a typical actuators-driven CR. It can employ two expanding mechanisms (EMs) for expanding and parking, and a linear mechanism (LM) for two-way movement.

Existing ILCRs employ four different driving ways. The pneumatic driven ILCR uses an air tube to connect an external controllable air source, and it shows good velocity by designing a sizeable periodic stroke. Its body is made of soft rubber material to obtain sufficient flexibility to improve the adaptability to the colonic bends. However, friction between the colon lumen and the air tube serves as a resistance to its movement, limiting its travel distance in the colon.

The SMA (shape memory alloy)-driven and micropump-driven ILCRs both show poor movement performance because of the slow response speeds of the SMA and micropump. The micromotor-driven ILCR, which can be wirelessly powered and controlled, is ideal for exploring the colon. However, the existing version focuses on integrating all essential modules (including batteries, telemetry circuit, mechanisms, and tools for diagnosis or treatment) within a small space, but neglects the achievable movement performance.

Capsule endoscopes represent a vast category of miniaturized endoscopes for a variety of diagnostic, targeted drug delivery, or surgical applications. They include:

Limited size and energy budget are the two significant constraints that limit the development of highly advanced and functional ingestible devices. Reduction in size is one of the significant challenges. The device should be small so that it can be easily swallowed. Attempts are made to develop a capsule with a diameter of less than 1cm and less than 3cm to pass through the digestive tract easily. The space within the capsule is limited; therefore, the components’ accommodation is a challenging task. Wireless communication through the human body is another major challenge for wireless capsule endoscopy.

Compared with push endoscopy, capsule endoscopy is superior in identifying abnormalities in the GI tract and visualizing the small intestine’s entire length. Even so, the present capsule endoscopes do not provide high image resolution and frame rates. The most concerning limitation is the limited control of the movement. The movement of present capsules depends on the natural transit of the bowel. This makes the system incapable of repeated examination of the same area. Besides, all of the capsules are powered by two coin-cell batteries with limited power. The batteries often get depleted even before the examination is over.