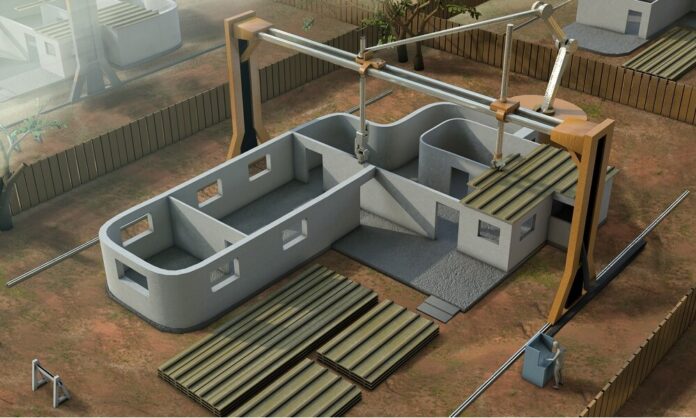 The promise of its future impact on traditional manufacturing processes is unpredictable. However, it seems that 3D printing will propel the revolution of fabrication modes forward, and bring in a new era for customized fabrication.

Additive manufacturing typically means a process of joining materials to make objects from 3D model data, usually layer upon layer, as opposed to subtractive manufacturing methodologies. Due to its ability to manage small volumes, intricate designs, and light-weight but strong structures, technology is transforming the way that many industries operate.

Guided by computer-aided design (or CAD) file, 3D printers can use different materials, including plastic, metal, and ceramics, to produce three-dimensional objects like a machine or product prototypes, special tools and end-use parts for a variety of industries – including aerospace, aviation, automotive, health care, tourism, and others.

Currently, the technology faces some challenges associated with size and scalability, high material costs, a narrow range of materials, limited multi-material printing capabilities, and quality consistency issues. However, the continuing advancements in the AM technology and material sciences are likely to address these limitations and are expected to drive broader adoption.

This post will explore some of the top manufacturers of 3D printed houses and cabins in the world.

Russian robotic construction company Apis Cor is the first company to develop specialized equipment for printing an entire building (walls and structures) on-site. It built a 3D construction printer, capable of fully printing a house in any place within 24 hours under any weather conditions. This first mobile circular construction 3D printer, transported on a crane, is 4.5 meters long, 1.5 meters high and wide. This solution requires only 30 minutes to set up. It features a stabilization system and “mobile automated mix and supply unit” and control program to facilitate the construction work. It can cover a total area of 132 m², creating walls layer-by-layer using the mixed concrete. The stabilization system enables it to be installed on almost any surface with less than 10 cm of elevation difference.

The company first made headlines in 2017, when it built a full-scale house in just 24 hours in Russia. Then in 2019, it created the world’s largest, two-story office in Dubai, measuring 9.5 meters height with a floor area of 640 square meters. It took a total of 17 days to print with a gypsum-based material. The company’s mission is to develop fully-autonomous equipment that can print buildings on Earth and beyond.

Danish 3D printing company 3D Printhuset is the Nordic region’s leading supplier of 3D printing and scanning technology. An authorized reseller of printers and equipment from the world’s top 3D companies, the company has a large showroom and office in the center of Copenhagen. It offers a comprehensive print and scan service for customers, including the printing structure of the Building on Demand (BOD). 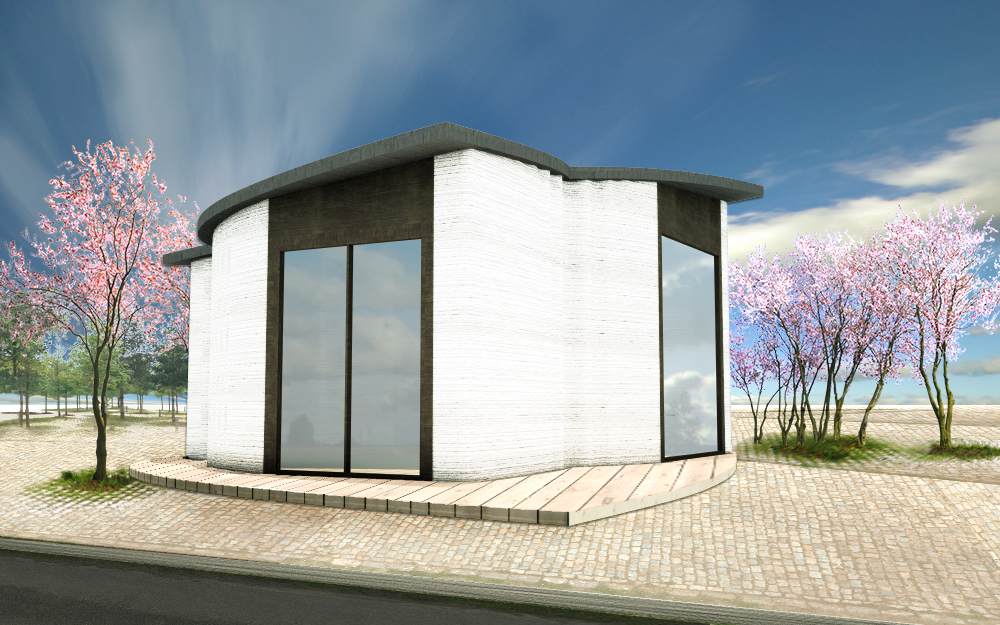 The company recently printed a 3D printed office-hotel in Nordhaven, Copenhagen, stated to be Europe’s first inhabitable 3D printed building. The exterior walls of this flat-roofed office hotel were 3D printed by 3D Printhuset’s 3D printer using printable cement produced from recycled bricks and sand. Construction began on 11 September. The printing process took twice the estimated completion time due to the difficulties with the whole material handling before printing.

Be More 3D is a Spanish startup, determined to work for the improvement and implementation of 3D printing technologies in construction. One of the first in Spain to start 3D printing buildings, Be More 3D, is based in Valencia. It printed its first 24 square meter house in Spain, in collaboration with the Polytechnic University of Valencia. 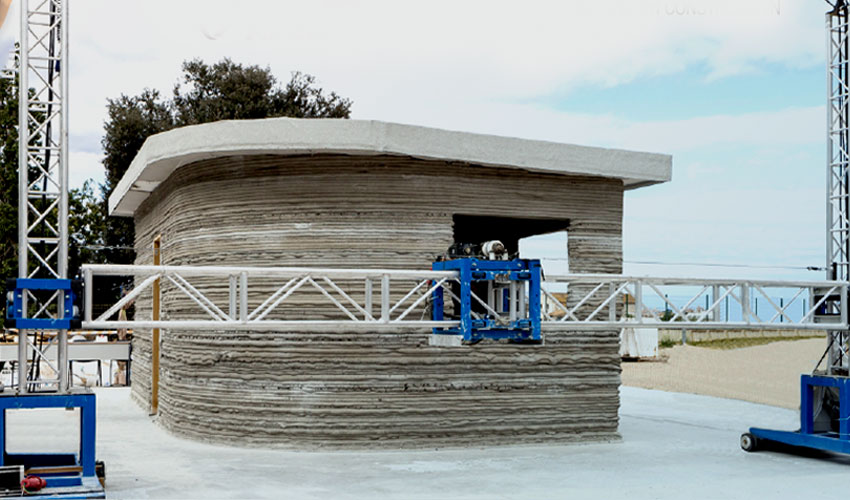 Its new concrete 3D printer, named BEM PRO 2, is the first concrete machine marketed in Spain. The device can operate in extreme heat and humidity conditions and has an assembly system, making it ideal for transport and manufacturing houses in disadvantaged or war-torn areas.

This technology helps them develop multiple projects, such as the construction of 32m2 homes in Africa. In 2019, Be More 3D showcased its technology at the first edition of the “Solar Decathlon Africa,” printing a 32 m2 house in 12 hours and won the most innovative startup award. 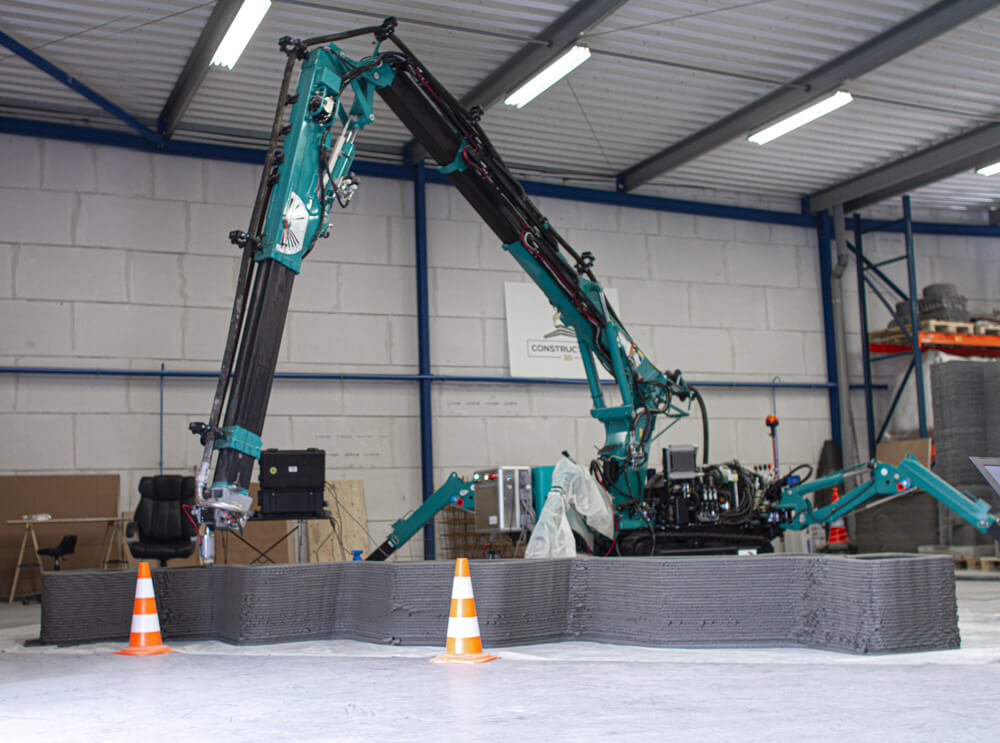 A subsidiary of Machines-3D, a reseller offering a range of 3D printers, 3D printing materials, and accessories, and 3D scanners, Constructions-3D develops a turnkey solution, capable of printing structures on-site, using the additive manufacturing, coupled with a robust, economical and transportable machine.

The MAXI PRINTER is built on the model of a hydraulic lifting crane and can be folded for easier transportation. This construction 3D printer is delivered with its 20-foot container and all the accessories needed for it to work (e.g., pumps, software) as well as a training session.

COBOD is a Danish 3D printing construction company, established initially as a 3D printing reseller, service provider, and developer of 3D Printhuset. It launched the BOD2 3D printer in 2018 as an upgrade to the BOD.

The BOD2 3D printer can print buildings with measurements of 12m in width, 27m in length, and 9m in height. The size can be extended with modules in width, length, and height of 2.5 meters. COBOD also developed a new method for setting up the BOD2, involving premade concrete feet unto which the Z-axis is mounted. This reduces the setup time by 50%, allowing the printer to be installed in a new location in 4 hours. 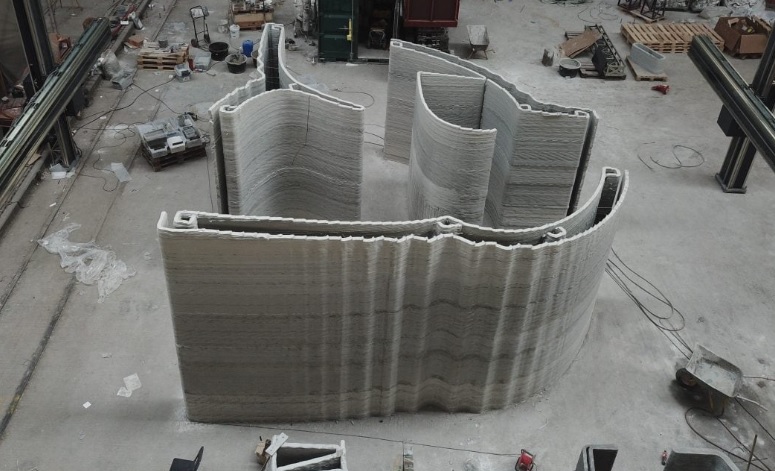 Its maximum capacity can accommodate six modules for width equaling 15 meters, and four modules in height, coming up to 10 meters, with no restrictions for length. The BOD2 can produce three-story buildings in one go, with each story capable of being more than 300 square meters in length. The company recently provided a live demonstration of its technology at the international Bautec construction exhibition in Berlin, by 3D printing the walls of 4 small houses in three days.

US-based concrete specialist Contour Crafting developed a concrete 3D printing process in association with Behrokh Khoshnevis at the University Southern California (USC). The technology uses a robotic system that moves upwards as concrete material is laid down by the construction module.

Contour Crafting recently announced a partnership with QUIKRETE to utilize an advanced concrete mix formulated to include a coarse aggregate and boast shape-holding thixotropic properties and rapid-setting and dimensional stability features. 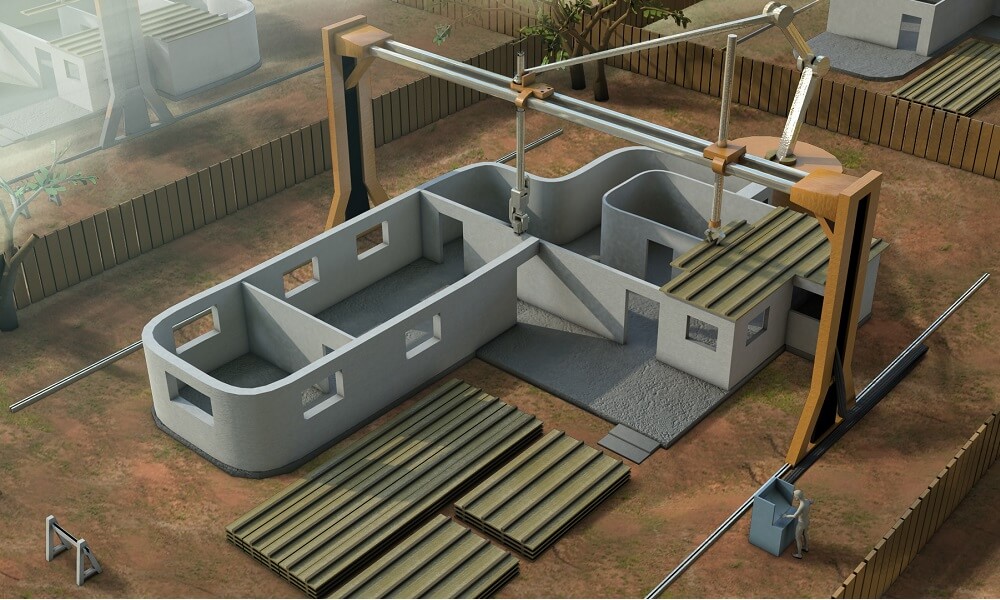 The companies work together to build four low-income housing units and establish concrete 3D printing as a method of constructing elements and buildings more quickly, efficiently, and affordably than conventional methods.

With this, Contour Crafting can significantly reduce the cost of commercial construction, eliminating material waste during manufacturing. Contour Crafting projects include 3D printing of a 610 square meter house in less than 24 hours.

CyBe Construction is a Dutch specialist in concrete 3D printing. The company has launched two concrete 3D printers, CyBe R 3Dp and the CyBe RC 3Dp, and in-house mortar material. The printers, with a 200-mm/sprinting speed, can print large structures in 20 minutes with two hands-on operators. These mobile printers with rubber tracks can roam freely around a construction site and be used for various other applications like abutments, floors, walls, formworks, and sewer pits.

Cybe’s technology is touted to be one of the most innovative and reliable ways to build an integrated residential unit with the use of low-cost digital machinery. The company also developed a patented material, based on a concrete mix.

Texas-based startup Icon is the first company in the United States to get a building permit to 3D print a home. The company won the headlines when they won an award from NASA for their design of a 3D printed home to be built on Mars. Their concrete 3D printer Vulcan II/2 3D features a clean, sleek design and the ability to print a house of 600 to 800 square feet in under 24 hours.

Vulcan II boasts many great features, such as only requiring four to six people on-site to operate and oversee the entire process. In terms of interface, a built-in CAD tool and print planning platform translates floor plans into print jobs within minutes and also provides pre-print visualization. The Vulcan II prints exclusively with Icon’s Lavacrete, which has the properties of concrete, and stiffness required to be extruded from a nozzle. In other words, Lavacrete holds its shape once it’s extruded. Icon has also developed a material-handling and -a delivery system for Lavacrete called Magma, which makes Lavacrete on-demand with the push of a button and sends it to the print head, ready for printing.

SQ4D is a 3D printer manufacturer from Patchogue, NY, that produces consumer and business-grade 3D printers and 3D printing services, as well as the development of industrial-grade 3D home and building printers. This digital-driven system reduces labor to as little as three people, accounting for up to 41% of the total construction of a home. ARCS low-power consumption technology allows homes and buildings to be built using far less energy than needed in traditional construction methods, creating an environmentally friendly impact. The company recently made the largest permitted 3D printed home in the world. The home is 1900 square feet and took only forty-eight hours of print time, over eight days.

World Advanced Saving Project, or WASP, is an Italian company that developed a concrete 3D printer called the BigDelta, arguably the largest concrete 3D printer currently on the market. Big Delta is 12 m in height and 7 m wide, with adjustable arms that can extend up to 6 meters. This 3D printer promises to create cheap housing by using low-cost materials like mud and clay as a building material, especially for developing countries. The company designed and built Gaia, an eco-sustainable house, using the Crane WASP, a modular 3D printer that can create homes in various formats and sizes. The house was printed on-site in Massa Lombardo to demonstrate the potential of 3D printing in architecture and is the result of 7 years of research in the field of architecture and 3D printing.

Winsun is a Chinese company that made headlines in 2014 when it unveiled its first 3D printed houses using a machine based on FDM technology that places layer by layer a mixture of cement, sand, and fibers, proving enough resistance to the walls.

The printer, which measures 20 feet tall, 33 feet wide, and 132 feet long, is “the world’s first continuous printing 3D printer and largest 3D house printer.” The 12-year-old company creates CAD drawings for sections of the building, which it prints in its factory with layers of a paste comprised of glass fiber, steel, cement, hardening agents, and recycled construction waste. The company assembles the building segments into the final product on site.

The company constructed a five-story apartment block, which company claims to be the world’s tallest 3D-printed building and is currently on display in China’s Suzhou Industrial Park in the eastern Jiangsu province. Winsun has several other prototypes that customers can visit outside its main factory. The company now owns 151 patents. 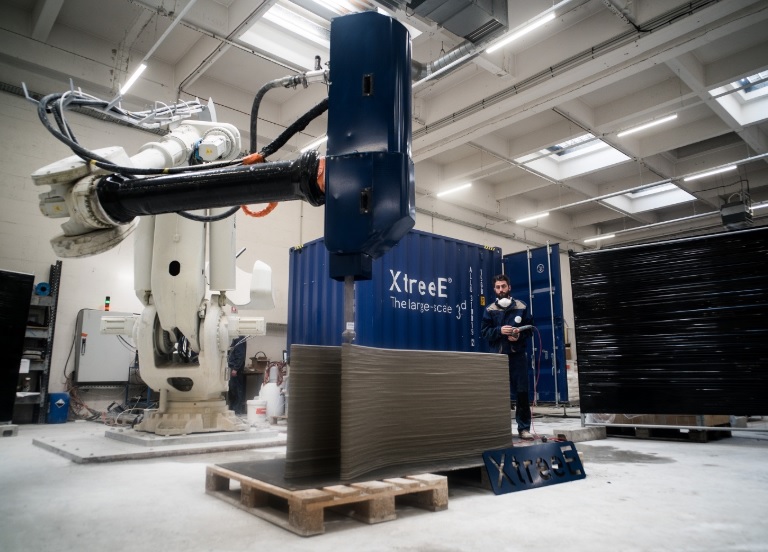 It uses a giant robotic arm for printing, which can create objects 3 m high and 5 m long without being repositioned. Its specially developed concrete takes only 20 hours to cure and achieves a compressive strength of over 80 MPa. The company operates via two services: renting its large-scale printing systems or assisting customers with collaborative design and large-scale prototype manufacturing.