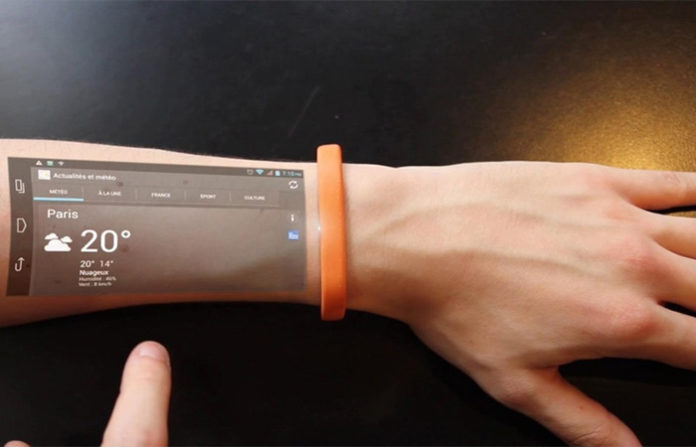 A wearable is a computing device worn on the human body as an accessory or as part of material used in clothing to monitor human activity such as walking, running, sitting and eating or improve efficiency, productivity, service, and engagement across industries including healthcare, elderly care, personal fitness, entertainment, etc. It comes in many different forms, such as watches, glasses, wristbands, or even jewelry items.

Different sensors are placed on wearable devices, depending on the type of activity monitoring required. An accelerometer measures the position in three dimensions, determining whether the device is horizontal or vertical, and whether it’s moving or not. Gyroscope determines the orientation by using Earth’s gravity based on the principle of rotation. GPS is a location sensor that is widely used for navigation. A microphone is used as an acoustic sensor that converts sound into an electrical signal.

Due to limited bandwidth and processing power, a wearable device provides less security, compared to other computing devices. As a consequence, these security vulnerabilities increase the chance of possible cyber-attacks which can put users’ safety and privacy at risk. Since wearable devices are not standalone devices as they will require to pair with other gadgets such as Smartphone to perform most functions, it creates further security vulnerabilities such as insecure transmission of data through Bluetooth, software communication to the Cloud via a cellular or Wi-Fi network, unsafe data storage on Cloud, lack of authentication and lack of physical security which can result in information leakage such as loss of static assets like files, documents or dynamic asset like credit card number.

According to a recent survey, among the top consumer concerns about the IoT, 28% of respondents are concerned about “someone hacking into the device and doing something malicious” and 26% concern about “not knowing how the information collected by the devices will be used.” This implies that security issues are the significant concerns that potentially reduce user acceptance and trustworthiness towards devices. People worry about wearable technology that exposes the potential privacy risks of devices that can record and capture personal private data. The privacy issue is one of the significant challenges yet to be solved in wearable computing. Therefore, it is essential to investigate the security vulnerability on the devices for user protection.

The following is a list of top 18 leading manufacturers of wearable security devices that you need to know.

1. Apple – one of the world’s top wearable technology companies, offering wearable products such as Apple Watch and Apple AirPods.

2. Google – tech giant behind Wear OS, a version of Google’s Android operating system for smartwatches and other wearables.

3. Fitbit – the world’s leading fitness wearable technology company that designs a variety of wearable devices that can sync with more than 200+ phones on all platforms, including iOS, Android, and Windows.

6. BearTek – maker of Beartek Gloves, a pair of smart gloves that uses Bluetooth or Wi-Fi technology to control phones and cameras remotely.

7. Hexoskin – a leader in non-invasive sensors and smart clothing that can deliver predictive health analytics for health, fitness, and wellness.

9. Electricfoxy – maker of garments built with electronics to create a new aesthetic of form and behavior as our expression, identity, and individuality.

10. Emotiv Systems – an Australian company that has commercialized mind-controlled interfaces with its Epoc headset.

13. FashionTEQ – a fashion company that design smart jewelry for women.

14. Fin Robotics – a wearable tech gadget that can make the whole palm as a digital touch interface.

18. Xiaomi – the world’s 4th most valuable technology startup, known for its smartphones and wearables such as fitness trackers, earphones, and VR headsets.