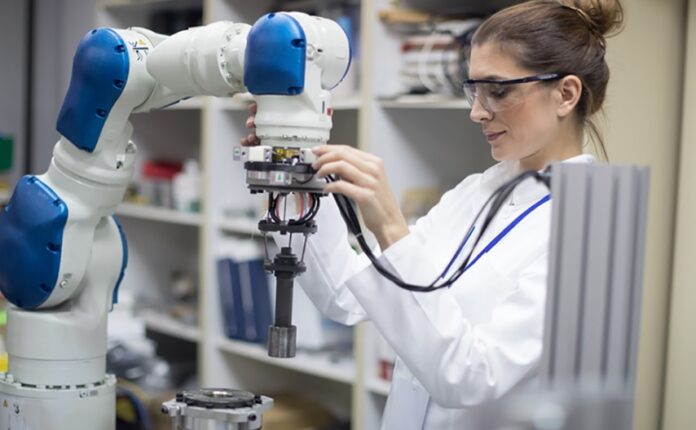 Often referred to as cobot, a collaborative robot is designed with various technical features to perform tasks in collaboration with human workers in industrial sectors. The goal is to ensure the robot does not harm workers when they come into direct contact, either deliberately or accidentally.

These features include rounded contours, padding, lightweight materials, and sensors at the robot base or joints to measure and control force and speed, ensuring these do not exceed defined thresholds if contact occurs.

A collaborative robot is easy to install, program, and reconfigure. It is compact and lightweight and incorporates safety capabilities; thus, instead of being used only by experts, it can be used by people with no or little expertise in robotics.

Though these robots are not huge powerful machines for high payload operations, they can support human workers in arduous, repetitive tasks in the growing field of human-robot collaboration.

Since a collaborative robot enables co-manipulation of objects with the human worker, it can provide many benefits, including “strength amplification, inertia masking, and guidance via virtual surfaces and paths.”

Human-industrial robot collaboration ranges from a shared workspace with no direct human-robot contact to a robot that adjusts its motion in real-time in sync with a human worker. The International Federation of Robotics (IFR) defines two types of robots designed for collaborative use.

The first one covers robots that comply with the International Organization for Standards norm 10218-1, specifying guidelines and requirements for the inherent safe design, protective measures, and information for the use of industrial robots.

The second one covers robots that may not satisfy ISO 10218-1 requirements, yet follow different safety standards, such as national or in-house standards, determining the level of contact between robot and worker in collaborative applications.

At the end of this technical spectrum is traditional industrial robots, operating in a separate workspace that workers can enter periodically without shutting off the power. The workspace of this type of robot can be fitted with sensors to detect human motion and to ensure the robot works at very slow speeds or stops when a worker enters the workspace.

They support employees in their workplace, relieving them of many heavy, unergonomic, and tedious tasks, besides automating parts of a production line with minimal changes to the rest of the line. This provides companies with no automated production processes an entry to the productivity and quality improvements offered by robots.

For companies, such as automotive manufacturers with automated production lines, the additional use of collaborative robots offers an opportunity to support workers in completing final assembly that is often the source of chronic back injuries.

The key benefits of collaborative robots are as follows:

To sum up, the collaborative robot market is still in its infancy, and the end-users and systems integrators are still gaining experience in what works and don’t in designing and implementing various collaborative applications. Technology developments in sensors and grippers promise to expand the range of applications that the robots can perform. Programming interfaces also continue to become more intuitive, not just for cobots, but also for traditional industrial robots.