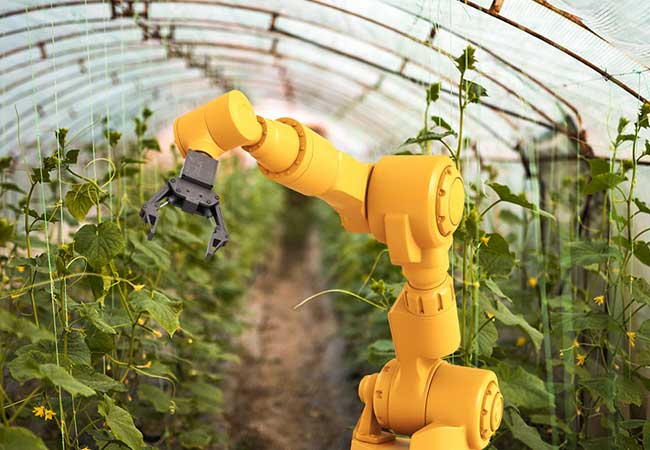 Robots are very promising to solve some of the most pressing agricultural challenges, from increasing productivity and profits to addressing labor shortages and environmental protection.

The global population is expected to grow from 7 to 9.2 billion by 2050, requiring a 60 percent increase in food production, according to the UN Food and Agriculture Organization. Unfortunately, the current agriculture industry is not equipped to meet future demands. Cultivation revenues have remained flat for 25 years, while production costs continue to increase. Farmers should find new and innovative ways to tackle this imminent food crisis.

According to a recent business and commerce study by Transparency Market Research, the increasing demand for food has raised a case for extracting maximum yield from the available agricultural landscape, giving birth to the market for agricultural robots. The report states that there will be a 24.1 percent increase in demand for agricultural robots that can be used for weed control, cloud seeding, seed planting, soil analysis, and environmental monitoring.

The researchers say that as awareness of the advantages of robots grows and the technology becomes more affordable, demand for global agricultural robots will increase at a CAGR of 24.1 percent over the projected five-year period.

Agricultural robots can automate slow, repetitive, and dull tasks for farmers, enabling them to concentrate more on improving overall production. Some of the most common robots in agriculture are used for: Harvesting and picking, weed control, weed mapping, fertilizing and irrigation, thinning and pruning, crop monitoring and analysis and sorting and packing.

In this post, we will discuss some of the main use cases of robotics in agriculture.

Harvesting is one of today’s major challenges facing fruit and vegetable growers, as they face rising labor and energy costs and decreasing profitability. To overcome this, robotics firms work with farmers to create robots that work alongside the existing workforce and fill gaps in productivity.

However, the seasonality and the delicacy of each crop like soft fruits are slightly challenging for robotic harvesting because they need manual skill. Selective harvesting is a technique used for harvesting part of the crop by robots that meets a certain threshold or quality. Thus, only crops with prescribed requirement criteria are harvested to minimize waste effectively. On the other hand, it is quite simple to harvest crops like maize, barley, and wheat. It can be done with a combined harvester which, like a tractor, can be automated.

Pesticides and weed killers can seriously damage the environment in fields. Robots provide a much more efficient method. The concept of micro-spraying could significantly reduce the herbicide in cultivated crops. Micro-spray robots use computer vision technology to detect weeds and then sprinkle them with a target drop of herbicide. Some robots do not even have to use chemical substances. RoboCrop, for instance, uses computer vision to detect plants when pushed through a tractor. It then hovers the spaces between plants automatically to eliminate the weeds. Additional weeding robots use lasers to kill the weeds.

Weed mapping includes the use of a robotic vision factor in tapping weed species locations, locations, and density. This method may be used to detect infestation and distribution of weeds since weeds are usually patchy during the rowing of crops. Another method is active form recognition which was originally developed to recognize human faces and to classify weed species according to their contours. Research has demonstrated that machines can identify up to 19 weed species. Color pigmentation in weed recognition was also noted as useful. The final result is the obtainment of a weed map that can be translated into a processing map and serves as a template document for weed management.

Sorting and packaging demand a lot from human operators in today’s fast-paced production environments because they require uninterrupted speed, precision, and texture. Robots can complete these tasks consistently at high speed without breaking. Up to four robots with a human-like eye-hand coordination capability are equipped with visual line tracking technology to sort and select loose parts from a moving conveyor using a single vision system.

It is quite inefficient to irrigate and fertilize plants that have traditionally used a lot of water. By targeting specific plants, irrigation with robot-assisted accuracy can reduce wastewater. Ground robots navigate between crop rows autonomously and pour water directly at each base of the plant. The robots also have the advantage of having access to areas not accessible by other machines. For example, maize farmers have a problem with plants growing too fast to fertilize them reliably.

Monitoring large agricultural fields is an important challenge. Drones and robots allow farmers to obtain far higher data than in the past on their crops. They gather data independently, and this information could help breeders to identify the genetic lines that can produce the highest quality and yield at specific locations. Most drone companies offer farmers combined packages, including robotic equipment and analytical software. The farmer can then move the drone to the field, start using a tablet or smartphone to start the software, and view the crop data collected in real-time. Ground-based robots provide even more detailed surveillance since they can get closer to crops. Some may also be used for other tasks like weaving and fertilization.