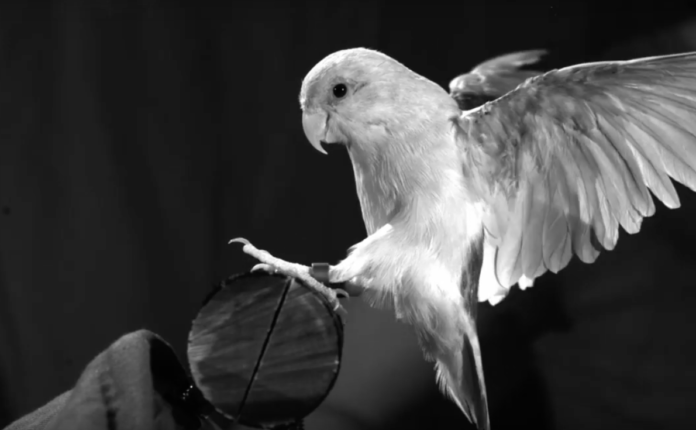 Flying an Unmanned Aerial Vehicle (UAV) such as drones or quadcopters is an exciting experience, but landing them safer is no fun, especially when those UAVs are designed for military operations and cost millions of dollars.

Current UAVs are somewhat restrictive because they have fixed and rigid wings that reduce the flexibility in flying. To extend the operation of current fixed-wing UAVs, researchers conducted several experiments in the past with morphing wing structures, inspired by birds, they used machine learning algorithms to learn a flight controller using inspiration from nature.

A team of researchers from Bristol University and BMT Defense Services used a standard RC aircraft with a uniquely shaped wing. As it is shown in the video below, the wing can reshape itself as it flies, allowing the system to swing as it lands like a bird approaching its perch. This morphing wing scoops through the air, sends the UAV up slightly, and then on a much sharper and shorter path. Unfortunately, the researchers haven’t been able to perfect the grappling claws to replace the landing gear, but they’ve got the swooping motion down pretty well.

To solve this puzzle and create aerial robots that land like a bird, Stanford researchers study birds with five high-speed cameras. Graduate student Diana Chin uses a small, pale-blue bird named Gary to carry out her research. When Diana points her finger, Gary flies to a perch covered in Teflon, making it seemingly impossible to hold fast. Gary’s successful touchdown on the Teflon–and other poles of a variety of materials–teaches researchers how to create machines that land like a bird.

“Modern aerial robots usually require either a runway or a flat surface for easy take-off and landing. For a bird, there’s a potential landing spot almost everywhere, even in cities. We wanted to understand how this is achieved and the dynamics and forces involved,” said Chin, assistant professor of mechanical engineering.

Even the most advanced robots are nowhere near the ability of animals to grasp objects of varying shapes, sizes, and textures. The researchers, therefore, collected data on the landing of Gary and two other birds on different surfaces that include a variety of natural perches and artificial perches covered with foam, sandpaper and Teflon.

The research, published in eLife on August 6, includes detailed studies of friction produced by claws and legs of birds. The researchers have found from this work that the secret to the parrot’s perching versatility is in the grip.

“When we first processed our data on approach speed and forces when the bird landed, we didn’t see any obvious differences. But then we started looking at the kinematics of the feet and claws – the details of how they moved them – and discovered that they adapted them to stick to the landing,” Chin recalled.

Depending on their observation on landing, the extent to which birds wrapped their toes and curled their claws varied. On rough or squishy surfaces–such as medium-sized foam, sandpaper, and rocky wood perches–their legs could generate high squeeze forces with little help from the claws. On the perches that were hardest to grasp–the floss-silk wood, the Teflon and the large birch–the birds curled their claws more, dragging them along the perching surface until they were secure.

This variable grip suggests that researchers could separate the control of approaching landing from the actions needed for a successful touchdown when building robots to land on a variety of surfaces. Their measurements have also shown that the birds can reposition their claws in a mere 1 to 2 milliseconds from one graspable bump or pit to another. (It takes about 100 to 400 milliseconds for a human to blink.)