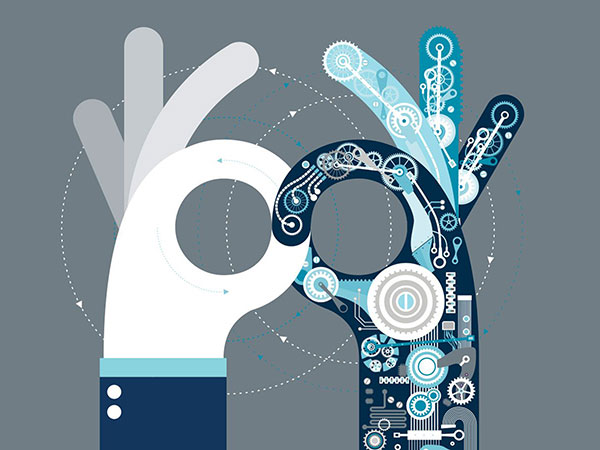 These robots are especially useful to automate rule-based processes requiring interaction with multiple, disparate IT systems. Efficiency is not the only benefit of RPA–it also enables increased process quality and eliminates errors that can result from manual work. In the Fourth Industrial Revolution, clerical work is expected to be automated as industrial robotics automate production in shop floor. Moreover, using RPA technology typically increases customer satisfaction internally and externally.

RPA is an all-new technology. So, we thought it might be timely to debunk some of RPA’s common myths or fallacies.

Interestingly, the term “Robotic Process Automation” is a misnomer. It has no physical or industrial robots. Instead, you get software robots (or just software) automating mundane, repetitive digital tasks. The good news is a shift from Robotic Process Automation to Intelligent Automation. This is undoubtedly driven by our current obsession with Artificial Intelligence, but also by industry players’s desire to move up the value chain.

2. Robots will replace the workforce

There is fear that technology, especially robots, will displace and replace workers. Who can blame employees. Post-the-Great Financial Crisis 2007–2009, job and wage growth was tedious in many economies. The digital disruptions sown by technological innovations certainly felt like a double whammy. The truth is more nuanced. While casualties are certainly inevitable, McKinsey estimates that less than 5% of all occupations can be fully automated based on currently demonstrable technologies. Another 60% have at least 30% automated constituent activity. What actually happens is that robots do the work people hate anyway. Or, as the saying goes, “taking the robot out of man.” And as RPA industry grows and matures, we haven’t yet considered creating new jobs. In short, unlike soon, we see mass unemployment.

Robots are as accurate as the programming of the robot developer. Because the RPA robots have no cognitive capabilities. They will simply execute the set of preconfigured instructions (to a T, it must be said). So if the robots are misconfigured or if some of the underlying assumptions about robotic operations are wrong, then errors are inevitable.

4. RPA is (just) a glorified macro/script

While there are definitely similarities, an RPA software is stronger than a simple macro script. Using RPA, for example, provides unique ability to integrate multiple, disparate UI systems. Most company RPA tools also put a lot of emphasis on governance, which isn’t something you get with macros or scripts.

Many vendors position RPA as easy-to-use software. One that any end-users, subject matter experts or non-IT staff without programming skills can use to design and develop their own automated solutions. Accordingly, it is not uncommon to find tenders that specifically call for a solution that provides users with all levels of IT skill, including users with little to no programming background. Unfortunately, this approach often leads to disillusionment. For example, it has been widely cited that RPA’s failure rates are between 30 and 50% anywhere. Why is this?

Many of the actual processes to be automated are quite complex with a number of interdependencies. Accordingly, the solution designed must be fairly robust, with the ability to handle exceptions gracefully. This is not something that any organization can reasonably expect to accomplish. For example, robot developers often use selectors to interact with an application’s various onscreen elements. This process involves a fair amount of technicality.

Some may point out that many of the leading RPA software features “record-and-play.” This is basically a desktop recorder that watches a user’s actions, generating the script automatically. The scripts thus generated, however, are typically low-quality and certainly not robust enough to account for various scenarios and handle possible exceptions. That’s why Blue Prism, one of RPA’s leading software providers, offers no desktop recorder. Such an approach increases over time the total cost of ownership and reduces the longevity and resilience of the developed automation.

6. RPA is only about cost reduction

It’s not true. As mentioned, a robot’s annual cost is lower than an FTE’s loaded wage. And that’s not because a robot works 24/7 without lunch breaks, no annual leaves, etc. Consider also that one minute’s work for a robot is roughly equivalent to fifteen minutes ‘ work for a human employee. And RPA is definitely cheaper if you consider the other alternative— taking the traditional approach to system integration, where overall costs and project duration are so much higher.

8. Robots can automate everything

Definitely not. Indeed, there are very strict guidelines on the type of processes suitable for automation using RPA.

Some of these criteria include:

However, even if a process ticks all the above check boxes, it doesn’t necessarily mean automating through RPA will bring real tangible benefits. And that’s because the process itself may be inefficient and needs to be re-engineered first. The first rule of any technology used in a business, as Bill Gates says, is that automation applied to efficient operation will magnify efficiency. Second, automation applied to inefficient operation magnifies inefficiency.

This will be the ideal end-state, but can be difficult in practice. You will typically require a robot or process controller (a human) to run, schedule and monitor robots, handle exceptions, track robot performance, and all other production support activities. Equally important is the need for a business continuity plan. Because robots break down and do, you will need a contingency plan (which may not involve robots). Which brings us back to the point that robots never eliminate people from the workforce.