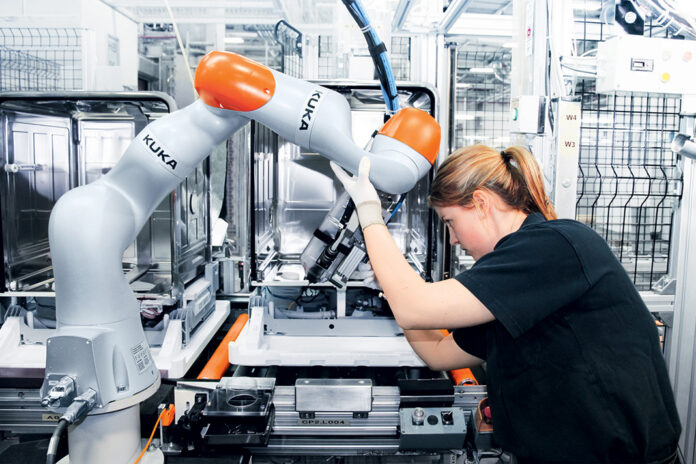 Human-robot collaboration (HRC) in shared workplaces opens up new possibilities in production and manufacturing. It can contribute to the development of factories of the future, in which humans and robots can work side by side and carry out tasks together in an open and fenceless environment.

A collaborative environment brings together both humans and robots’ best qualities to reduce manufacturing costs and time. It allows workers to focus on operations with high added value or demanding high dexterity levels, thus freeing them from repetitive or potentially risky tasks.

However, one of the key questions in human-robot collaboration is safety. Any harm caused by a robot due to an unexpected motion or behavior is not limited only to the worker’s physical injury but also has a financial impact on insurance costs, lost production, damaged machine, lost customers, and even loss of reputation of the company. To prevent this, it is important to identify, plan and supervise safety aspects from the start, at the designing phase, until the decommissioning and scrapping of the robot.

The hand guiding method refers to moving a robot system by a hand-operated device to transmit motion commands. In this, the robot receives the stop command directly from the operator, using a hand-operated device located at or near the robot’s end-effector. The device transmits the motion commands to the robot. This allows a cobot to move through direct input from an operator. The cobot stays in safety monitored stop until an operator actuates the hand guiding device through an enabling switch. Hand-guided cobots can work autonomously when operators aren’t around.

Also known as operational speed and worker-robot separation monitoring methodology (SSM), this is one of the available methods to reduce the risk of injury according to the ISO technical specification 15066 on a collaborative robot in a sharing workspace.

It ensures safety by specifying the minimum protective distance between a robot and an operator. The robot can move concurrently with the operator as long as they maintain a pre-determined distance apart. A safety laser area scanner constantly monitors at least the protective separation distance. When in motion, the robot never gets closer to the operator than the protective separation distance, which often varies based on how fast the cobot is moving.

The power and force limiting method allows the contact between an operator and a robot either intentionally or unintentionally. Still, it restricts/controls the robot’s speed, torque, motion to avoid any injury and pain. The threshold power and force limit values are determined in a risk assessment. The robots are specifically designed with power or force feedback built in to detect contact with a person.

Power and force limiting safety functions enable collaborative applications where contact with people is permitted when contact pressure and forces are acceptable. The PFL function will suspend the robot when it detects an external force exceeding the preset limit value due to contact or a collision between the robot and a worker or the robot and an obstacle.