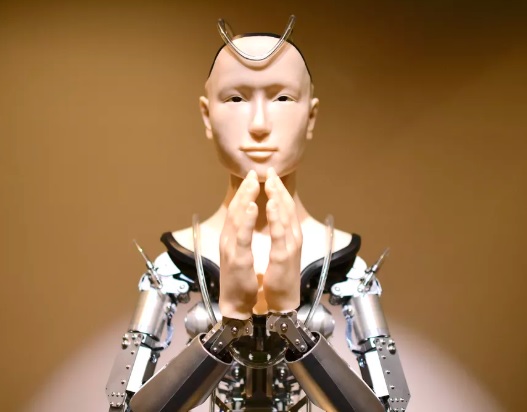 Robots have plenty of use cases in our daily lives. One of them is of a robot priest who can bless you, advise you, or even perform a ritual when a human priest is inaccessible.

Meet Mindar, a new robot priest at the 400-year-old Buddhist temple Kodaiji in Kyoto, Japan. Designed to look like Kannon (Buddhist deity of mercy) and to reignite people’s faith in Buddhism and declining religious affiliation, this $1 million machine can deliver pre-programmed sermons about the Heart Sutra and move around to interface with worshippers.

Although it is not AI-powered, the creators say they plan to give it machine learning capabilities that can help people overcome their most difficult spiritual problems.

Notably, it is not the first time robots appear in religious places. In 2017, an Indian company Patil Automation rolled out a robot that performs the Hindu “Aarti ritual” in front of the elephant-headed god, Ganpati.

In the same year, Germany’s Protestant Church created a robot called BlessU-2 to make the 500th anniversary of Protestant Reformation. It gave preprogrammed blessings to over 10,000 people. The robot can raise its arms, flash lights, recite a biblical verse. If requested, it will give a printout of its words.

SanTO, designed by roboticist Gabriele Trovato, is another robot that offers spiritual assistance to elderly people. It is equipped with software that listens to people, scans their faces for signs of specific emotions, and selects religious texts that may be relevant to their troubles.

A Japanese company has reprogrammed a humanoid robot ‘Pepper,’ a Buddhist priest that can perform rituals and funerals when a Buddhist priest is not available. It costs less at 50,000 yen (about $450) per funeral, compared to 240,000 yen ($2,200) for a human priest. The robot recites sutras while tapping drums. The robot was on display in August 2017, at a funeral industry fair in Tokyo.