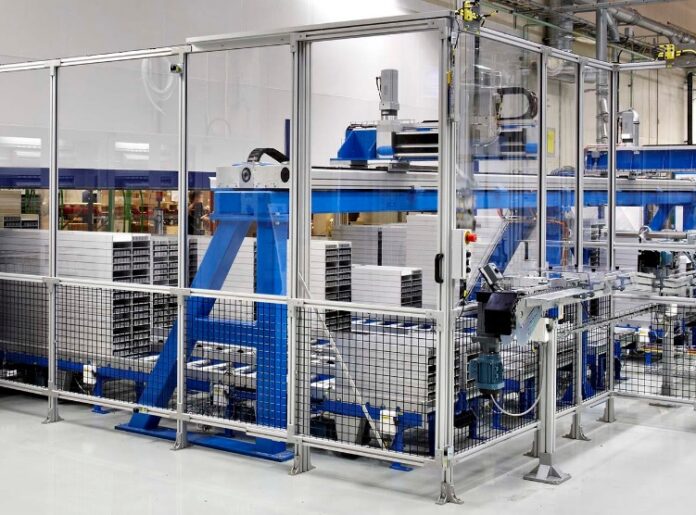 Human safety is one of the most critical aspects of designing a robotic workstation that involves human-robot interactions (HRI). Robots manipulate dangerous tools and can move with extreme rapidity and force that can cause hazards to humans in crowded (human-inhabited) environments.

Robots can generate large forces and torques with unanticipated or unpredictable movements for the operator. This poses a serious and immediate risk to the operator. For several years, the human operator’s safety was guaranteed by the physical separation of the robot in confined metal cages. But this drastically limited productivity as well as the flexibility of production lines.

With the recent arrival of industrial co-robots and human-robot collaboration (HRC), manufacturers can now remove the cages so that human workers and robots may collaborate to create a human-robot co-existing, smart factory. This versatile resource allocation has ultimately driven higher productivity and efficiency.

Yet, the fundamental safety problem remains a serious concern. Most hazardous incidents in robotic workstations occur due to the unintended contact between these robots and humans. Choosing the safeguard is vital for the maximum protection of the robot, equipment, and persons who might find themselves in the surroundings.

Today’s market offers a broad range of security equipment and solutions to ensure safety and efficiency in dynamic, uncertain environments. The final choice of selecting the best safety solution depends on the specific robot task, robot surroundings, and the level of human interference. This post will explore some of the best safety solutions and devices used for safeguarding robotic workstations.

Light curtains or light beams are photoelectric presence sensors used for a long scanning range. Designed with a single beam or multiple beams, they are mainly used to detect personnel or objects entering the robotic cell. They consist of emitter and receiver pair that creates a multi-beam barrier of infrared light in front of, or around, a robotic workstation. When the beam is blocked by interference, a stop signal is sent to the robot to stop it entirely and eliminate the danger.

The main difference between light curtains and multiple light beams is the resolution, which is an essential criterion while selecting a light curtain. Multiple light beams have a minimum resolution of 150 mm and are used for a long scanning range, up to 70 m. Mirrors can be used to deflect the beams, which simplifies the overall workstation layout. Light curtains are notably integrated into the safety system by connecting them to the safety PLC.

A safety mat is a mechanical device that detects presence when someone steps on it. The technology is based on compressed air, optical fiber, or electromechanical solutions. A signal is sent through the upper and lower plates separately via two wires connected to each plate. When sufficient pressure is applied to the mat, the conductive plates touch causing the output relays in the controllers to de-energize, and a stop signal is issued to the machine. Multiple safety mats can be placed together in series to form a complete floor-level guarding system. Mats are also made of industrial rubber with a thickness between 10 and 15mm.

Safety limit switches are compact solutions for gate monitoring. The device consists of a small magnet and a reading device, which detects if the magnet is not in its perimeter and sends a stopping signal to the machine. It ensures a human can trespass the hazardous zone only when the machine is stopped, or the risk inside the hazardous zone is not exceeding the measured limits. There are a lot of options for safety limit switches in the market. Solenoid interlock switches prevent the gate from opening by using a lock key attached to the door’s frame. The switch could be set to open after a determined delay or signal.

Laser scanners are meant to detect an approaching object by optical sensing and send a stop signal to the robot before it reaches the hazard zone. Based on the principle of “time-of-flight” measurement, they use pulses of light complemented with a rotation mirror that deflects light pulses over an arc, which creates a plane of detection. The scanner emits very short pulses of light. If the light strikes an object, it is reflected and received by the safety laser scanner. The safety laser scanner then calculates the distance to the object based on the time between sending and reception of the pulse.

Laser scanners create two zones: a warning zone and a safety zone. The warning zone provides a signal that does not shut down the robot but informs personnel that they approach the safety zone by an optical or sound alarm. The laser scanners’ main advantage over horizontal light curtains or mats is the ability to reconfigure the protected scanning area. The shape and the size of the area are configured by the software installed in the scanner. They can be programmed to accept specific intrusions that meet a certain shape profile, using additional sensors. Laser scanners support multi-zone safeguarding, and they can be mounted either horizontally or vertically. The laser scanners’ disadvantage is the slower response time and lower resolution level compared to light curtains.

Tactile skin or artificial skin uses a layer of sensors to measure pressure and proximity. This pressure-sensitive skin is relatively inexpensive and can offer reliable contact measurements on the robot body. It can sense multiple contact locations and also provide the spatial location of collisions. Besides safety-related functions, the sensitive skin offers touch-based robot motion control, which simplifies human-robot interaction.

Machine vision-based camera systems are electro-sensitive protective devices that use image processing technology to detect intrusion into the hazardous area. These cameras monitor rectangular horizontal or vertical areas of any size. When the camera detects intrusion, it sends a signal to the safety controller. Notably, the camera systems can be used for hand or body detection.