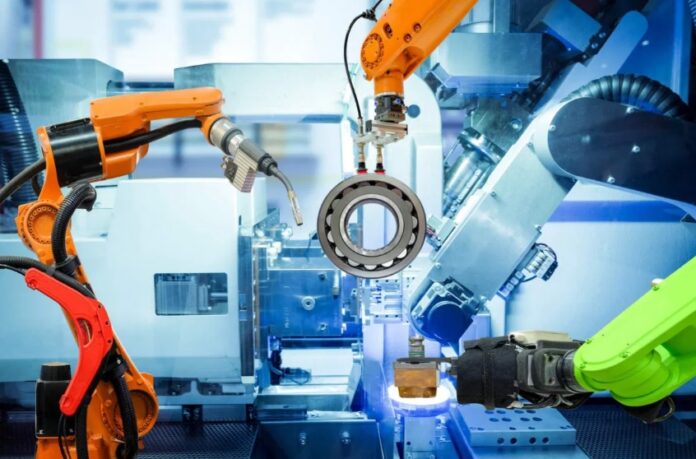 Robotics incorporates multiple engineering disciplines to build, program, and use robots to complete a wide variety of manufacturing tasks, including moving and assembling products, parts, and tools in industrial production lines.

Sometimes, a new subset of industrial robots, called collaborative robots or cobots, are used to safely work alongside humans to perform tasks that cannot be fully automated. Cobots also help manufacturers deal with a labor shortage that can occur as workers age out of their jobs.

Many manufacturers find additional value in utilizing robotics and automation to augment and improve their existing processes that require human involvement. According to IDC, by 2021, 20% of top manufacturers are likely to embedded intelligence, coupled with the industrial Internet of Things (IIoT), blockchain, and cognitive intelligence, to automate large-scale processes and speed execution time by up to 25%.

Notably, in 2018, there were 74 robot units per 10,000 employees in the global manufacturing industry, and real industrial robots now working in the United States number at least 230,000. It is predicted that in the next three to five years, more and more manufacturers will plan for robotics and automation while designing and engineering their products, factory layouts, and upskilling current employees to save money, increase efficiencies, and remain competitive.

Today, industrial robots are available commercially in various sizes, shapes, configurations, and different axes or degrees of freedom. The common types of industrial automation systems set up by these robots are as follows:

This kind of automation is deployed to perform repetitive and fixed operations to achieve high production rates. It uses a special purpose or dedicated robot to automate the fixed sequence of operations. Once employed, it is relatively hard to alter its operations or design, making it inflexible in providing operational varieties, but highly efficient to increase the production rate and reduce cost. Some of these automated systems are used in the distilled process, paint shops, and conveyors.

This type of automation enables a specific class of product changes and assembling or processing operations by modifying the control program. It is best suited for batch production processes where product volume is medium to high. However, it doesn’t allow to change and reconfigure the new product or operation sequence. This type of automation can be found in paper mills, steel rolling mills, etc.

This provides automatic control equipment with great flexibility to make changes in product design and operations. These changes can be implemented quickly through the commands given in codes by a human operator. This allows the manufacturers to produce multiple products in different ranges. Examples of these automation systems are automatic guided vehicles, automobiles, and multipurpose CNC machines.