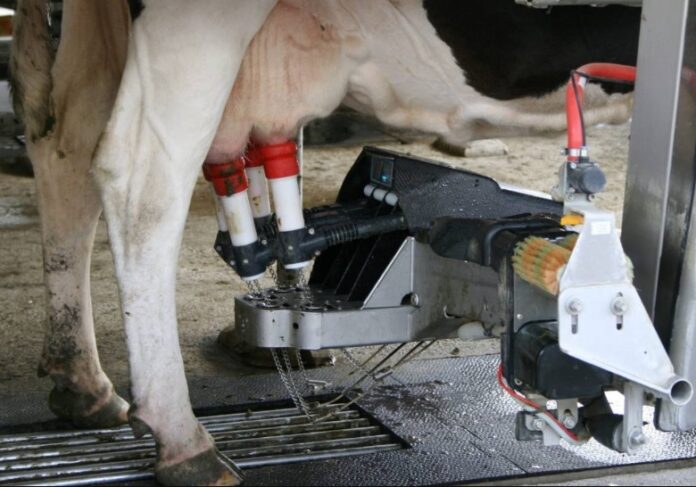 Cow milking is complex and demanding. It involves several proper procedures like barn sanitation and teat treatment, which would provide a low-stress environment for the cow to release adrenaline, which stimulates milk to let down.

Historically, cows were milked by hand. Milking by hand is not as easy as it may first appear. If the cow is anxious or afraid, the milking process will be more difficult and unpleasant for both the cow and dairy workers.

According to a study, 40% of dairy workers suffer injuries on the back and 30% on the neck and shoulders, due to the labor-intensive milking process. Besides, farmers need to be committed to milking in early mornings and evenings for seven days a week, regardless of their health and family responsibilities.

In response to the magnitude and expense of labor involved in milking, most of the milking process has been automated in the 20th century with automatic milking systems (AMS), also called voluntary milking systems (VMS), which were commercially available since the early 1990s.

Unquestionably, AMS has become an accepted technology in the modern dairy industry and is gradually becoming mainstream practice because of its ability to improve working conditions, milk yield, milking frequency, milk quality, udder health, and animal welfare. This post will examine the key benefits of automatic milking systems (AMS) in detail.

Before AMS technology became widespread, about half of the labor expense for large dairy herds was related to milking. Dairy farmers reported that morning milking, afternoon milking, and parlor maintenance took more than 4 hours per day. Therefore, AMS signiﬁcantly improves the efﬁciency of labor by milking parlor equipment such as automatic cluster removal and rapid entry and exit gates. By using AMS, farmers are freed from the milking process, and the associated rigid schedule and labor can be devoted to the supervision of animals, feeding, and other activities.

Several studies have shown that improvements in quality of life and the reduced time spent on milking were the primary beneﬁts realized by the introduction of AMS. Following the adoption of AMS technology, labor savings are signiﬁcant (20%–50%), which is the major reason dairy farmers worldwide adopt AMS. The data also show that milk frequency and yield generally increase with AMS, resulting from the lower stress on the udder and the increased comfort for the cows. However, the frequency and yield of milking may vary, mostly attributable to the inﬂuence of the farming environment, animal health, and climate.

Milk quality comprises hygienic quality and nutritional composition, with the essential parameters being somatic cell count (SCC), total bacterial count(TBC), freezing point, anaerobic spores, free fatty acids (FFA), and the content of fat, protein, lactose, casein, and urea. According to a study by Pomiès and Bony, AMS did not substantially change the milk’s hygienic quality. Some studies suggested that the milk quality in the AMS was comparable to non-automated milking and, in some cases, was superior.

However, with the more widespread adoption of AMS technology, several studies found changes in milk quality. But, there is no statistically signiﬁcant evidence for an overall quality effect of AMS. The results can vary depending on the study sizes, countries, farms conditions, dairy breeds, different stages of lactation, reproductive cycles, and even the brands of AMS. Despite these slight changes, there are no significant concerns about milk quality with respect to nutritional and microbiological standards.

Besides labor, milk yield, and milk quality, improvements in animal health and welfare are also the key outcomes of the adoption of AMS. After the introduction of AMS, cows are milked more frequently, which leaves less time for bacteria to develop in the udder between milkings. However, teat canals are also opened more often with the more frequent milking, which may cause a higher risk of bacterial invasions.

Mastitis is an inﬂammation of the mammary gland caused by bacterial infections, and its detection is essential in ensuring udder health. Some studies found that udder health deteriorated after the introduction of AMS with a higher average milk SCC. In contrast, other studies indicated that there was no signiﬁcant difference in udder health compared with non-automated machines by measuring mastitis incidence of SCC.

Lopez-Benavides reported a higher incidence of clinical mastitis with non-automated machine milking than AMS, which showed that udder health was positively affected by a change to AMS. However, the conclusion from existing research suggests that udder health slightly deteriorates after the introduction of AMS.

Evidence suggests that cows are profoundly affected by stress in their environments. Loud noise, yelling, and whistling are very stressful to cows. Besides, cows are creatures with strong social interaction. They repeatedly associate with the same cows, and timider cows tend to avoid the company of more aggressive ones.

In a robotic facility, a cow is free to follow her natural biorhythm, rather than constraining the schedule of the dairy operator. She is now entirely in charge of when she will eat, lay down and go to be milked. No longer is the intervention of a human in her environment associated with having to get up to stand in a holding area to wait to be milked.

The fact that cows are now able to choose when and with whom they associate contributes to the lower level of stress in the dairy herd. This low-stress environment is a very positive benefit of robotic milking.

Unlike humans, machines are not affected by the time of day, seasons, or mood swings. You can rely on a robot to milk the cows, identically the same way, whether it’s 10:00 on a Monday morning or midnight. A robot can milk the cows identically the same way every single time. This predictable consistency on the part of the robot works very well with cows, who themselves thrive in a consistent and predictable environment.

Animal welfare involves multiple parameters, such as health, productivity, stress hormone levels, behavior, and preference indicators. Although many factors affect the welfare of dairy cows on a farm, cows milked by AMS can manage their daily activities with more freedom and have more opportunities to interact with their environment. Researchers have compared the behavioral and physiological stress responses of cows during milking in traditional farms with the cows in non-automated farms. They show that the heart rate of cows in AMS was similar to or lower than those observed in non-automated farms. The evidence suggests AMS reduces physiological stress and discomfort compared with non-automated milking to a certain extent, and AMS is also able to monitor and detect cattle health and behavior.