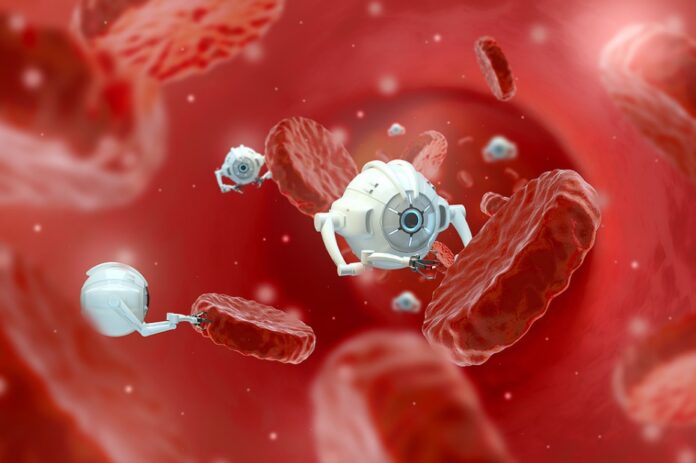 Nanorobotics is a new branch of nanotechnology that focuses on designing and fabricating devices at the atomic, molecular, and cellular levels. The ability to work at the molecular level, atom by atom, to create large structures with a fundamentally new molecular organization is at the heart of nanotechnology.

The goal is to take advantage of these properties by learning to control structures and devices at the atomic, molecular, and supramolecular levels and efficiently manufacture and use these devices. These hypothetical nanorobots will be extremely small and transverse inside the human blood.

These nanorobots would be equipped with special sensors to detect target molecules and could be programmed to diagnose and treat various diseases. Respirocytes, microbivores, and clottocytes are nanorobots that have been designed to act as artificial blood substitutes.

The respirocytes are designed to mimic all the important functions of red blood cells and are also used to treat anemia, heart attack, lung diseases, etc. In contrast, the clottocyte mimics the natural process of hemostasis, and the microbivore follows the process of phagocytosis to destroy the blood-borne pathogens.

The respirocyte comprises 18 billion atoms that are carefully arranged in diamondoid pressure tanks that can hold 3 billion oxygen and carbon dioxide molecules. Compared to natural red blood cells, the respirocyte would deliver 236 times more oxygen to the body tissues.

The respirocyte could manage the carbonic acidity, controlled by gas concentration sensors and an onboard nanocomputer.

Molecular pumps release the stored gases from the tank in a controlled manner. Respirocytes use molecular rotors to exchange gases. The rotors have different tips for different types of molecules. There are three types of rotors in each respirocyte. While traveling through the body, one rotor releases the stored oxygen. The second type of rotor captures all carbon dioxide in the bloodstream and releases it to the lungs, while the third rotor uses glucose from the bloodstream as a source of energy. Twelve identical pumps are laid around the equator; oxygen rotors on the left, water rotors in the middle, and carbon dioxide rotors on the left. There are gas concentration sensors on the surface of the respirocyte.

By imitating an erythrocyte’s oxygen and carbon dioxide transport functions, the respirocyte functions as an artificial erythrocyte. A 5 cc therapeutic dose of 50 percent respirocyte saline suspension containing 5 trillion nanorobots would completely replace the patient’s 5.4 liters of blood’s gas carrying capacity. Once the therapeutic goal has been met, the respirocyte can be removed from circulation, necessitating a respirocyte activation protocol. The blood to be cleared would be passed from the patient to a specialized centrifugation apparatus where ultrasonic transmitters would command the respirocyte to maintain neutral buoyancy during the nanapheresis procedure. Because no other solid blood components can maintain neutral buoyancy during centrifugation, those components precipitate outwards. Blood components are reintroduced into filtered plasma. The filtered plasma is combined with centrifuged solid blood components before being returned undamaged to the patient’s body.

Microbivores, also known as nanorobotic phagocytes, are a type of nanorobot that acts as an artificial white blood cell. The microbivore is a spheroid device made of diamond and sapphire with 610 billion precisely arranged structural atoms that measure 3.4 m in diameter along its major axis and 2.0 m diameter along its minor axis. It captures pathogens in the bloodstream and disintegrates them into smaller molecules. Microbivores’ main function is phagocytosis to absorb and digest pathogens in the bloodstream. The microbivore consist of 4 fundamental components:

The target bacterium binds to the microbivore surface via a species-specific reversible binding site during the operation cycle. When the bacterium and the microbivore collide, the surface comes into contact, allowing the reversible binding site to recognize the bacterium and weakly bind to it. Nine different antigenic markers should be specific and confirm the positive binding event confirming the presence of the target microbe. The nine marker sets would be distributed in 275 disk-shaped regions across microbivore in a total of 20,000 copies. The telescopic robotic grapples rise from the surface and attach to the trapped bacterium, establishing a secure anchorage. The bacterium can be transported from the binding site to the ingestion port using the grapple’s handoff motion. The bacterium is then internalized and minced into nanoscale pieces in the morcellation chamber. The remains are pushed into the digestion chamber, which contains a set of digestive enzymes that have been pre-programmed.

These enzymes are injected and extracted six times during a single digestion cycle, reducing the morcellate to amino acids, mononucleotides, free fatty acids, and simple sugars. Through the exhaust port, these small molecules are released into the bloodstream. The microbivores leave the body through the kidneys and are excreted in the urine after destroying pathogens.

In 30 seconds, a microbivore’s entire phagocytosis cycle will be completed. There is no risk of septic shock or sepsis because the bacterial components are internalized and digested into non-antigenic biomolecules. The pathogen is 1000 times faster than antibiotic-assisted white blood cells, and it has no chance of developing multiple drug resistance. They can also treat infections in the respiratory system, the cerebrospinal fluids, and the urinary and synovial fluids.

Hemostasis is the clotting of blood that occurs when platelets damage the endothelium cells of blood vessels. Colliding exposed collagen from damaged blood vessels with these platelets can activate them. Natural blood clotting can take anywhere from 2 to 5 minutes. Nanotechnology has demonstrated the ability to reduce clotting time and blood loss. Blood clots are found to occur irregularly in some patients. Drugs such as corticosteroids are used to treat this abnormality. Side effects of corticosteroid treatment include hormonal secretions, blood/platelet damage to the lungs and allergic reactions. Clottocyte is a mechanical platelet or clottocyte that can complete hemostasis in less than a second. It’s a spherical nanorobot with a 2 m diameter powered by serum-oxyglucose and has a compactly folded fiber mesh onboard. Clottocyte response time is 100-1000 times faster than the natural hemostatic system. The fiber mesh would be biodegradable, and when it was released, a soluble film coating on the mesh would dissolve when it came into contact with the plasma, exposing the sticky mesh.

Reliable communication protocols would be required to control the coordinated mesh release from neighboring clottocytes and regulate the multidevice-activation radius within the local clottocyte population. The onboard sensors of the clottocyte detect a change in partial pressure as clottocyte-rich blood enters the injured blood vessel, indicating that it is bled out of the body. At human body temperature, oxygen molecules from the air diffuse through serum if the first clottocyte is 75 meters away from the air-serum interface. Through acoustic pulses, this detection would be quickly broadcast to neighboring clottocytes. This allows a carefully controlled device-enablement cascade to spread quickly. The fiber mesh’s stickiness would be blood group-specific, trapping blood cells by binding to antigens on blood cells. Each mesh would overlap the mesh next to it, attracting red blood cells and halting bleeding immediately.

Clottocytes have a clotting function nearly identical to natural platelets at 1/10,000th the concentration in the bloodstream, i.e., 20 clottocytes per cubic millimeter of blood. The main danger of clottocytes is that the mechanical platelets’ increased activity could cause disseminated intravascular coagulation, resulting in multiple microthrombi.