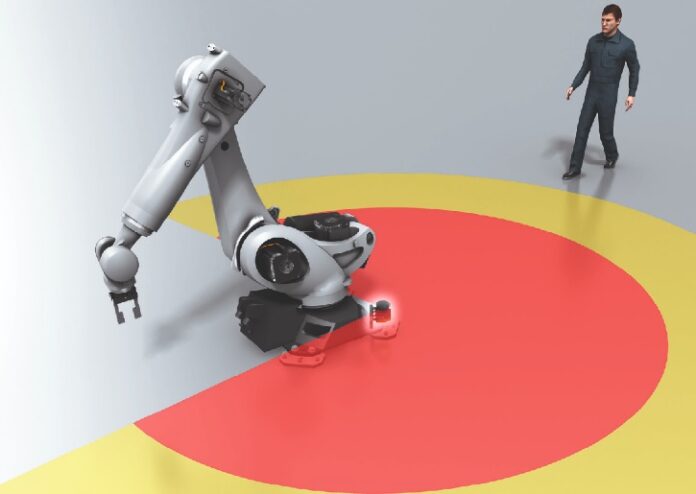 In today’s industrial environment, there is an increasing need for flexible machines to work autonomously and adapt to changing production conditions quickly and efficiently.

Human-robot collaboration is one of the answers to these flexible needs. It aims to fit together the best qualities of both humans and robots to reduce manufacturing cost and time.

But an important source of concern for a collaborative workplace is safety, i.e., to protect workers against the dangers posed by speed, movement, and force of robots because an impact with a moving robot can cause serious injury.

Robots can cause severe and fatal injuries to workers during interventions such as maintenance, unjamming, adjustments, and set-up. Traditionally, robots were physically separated behind physical barriers such as safety fences, but a collaborative robotic system seeks to remove these barriers and enables closer interactions between operators and robots.

According to the International safety standard, risk assessment is the first step in understanding and eliminating hazardous work environments. The following are some of the very common hazardous situations in a collaborative environment.

The single most important steps in providing safety and risk assessment are identifying the possible hazardous situations, determining the level of risk, and implementing the requirements of the risk reduction measure(s) to reduce the risk to an acceptable level.

The factors to be taken into consideration when estimating the risk are as follows:

A risk assessment aims to increase understanding of the hazards and reduce the rate and severity of injuries. It can also increase or maintain operational efficiency through correctly specified and designed risk reduction measures and assure cost-effective, sustainable solutions.

Some of the common modes of operation in terms of safety and strategies around collaborative robots are as follows.

The robot slows down when a worker gets closer. The robot motion is allowed only when the separation distance is above a minimum separation distance. Different technologies (laser scanners, safety mats, vision-based systems) are used to detect the operator’s position concerning the robot. The robot maintains a determined speed and separation barrier between itself and the worker. The relative speed of the worker and the robot is considered for minimum distance requirements.

It is an inherent design and control of the robot. In this mode, the power and force of the robot are limited. When the robot makes contact with a human being or any object with a certain force value, it stops immediately. The robot knows the required amounts of force to pick up a load and to move it. When it recognizes an increase in torque or force required for movement, such as collision, the robot arm safely stops.

The worker is in direct contact with the robot. He guides and trains the robot. The robot assists the worker in tasks in which a force has to be exerted. The robot motion is allowed only through the direct input of the operator. The hand guiding part is close to the end effector and consists of an enabling device and an emergency stop.

For robots working in a collaborative workspace, human safety is one of the most serious and important aspects to be considered. The companies must carry out proactive risk reduction measures to ensure that the robots and humans perform tasks concurrently during production operations. Many standardization bodies deal with the safety in human-robot interactions, and the most inﬂuential ones are the International Organization for Standardization (ISO). The inherent safety measures that are typically used on collaborative robots include: