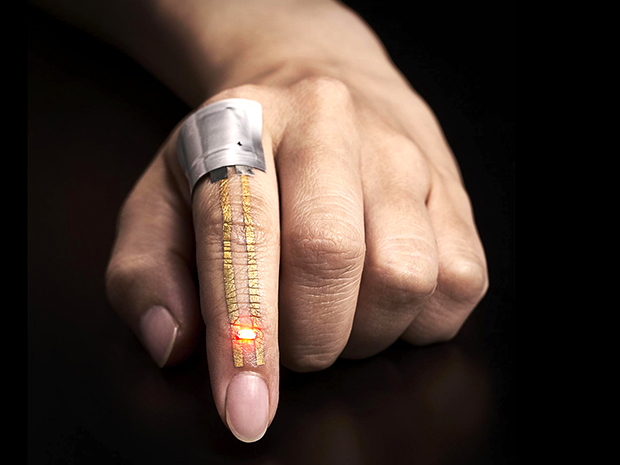 The non-flexible sensors are the most common ones today being used in a vast field of applications, but they have certain disadvantages like stiffness, intransigency, etc. These disadvantages are extremely prominent, especially when the sensors are associated with monitoring physiological parameters of a person or any application which involves stress and other extreme conditions which can damage the sensor.

Therefore, flexible sensors are considered the best alternative because of their better mechanical and thermal properties, low fabrication cost, and lightweight. These flexible sensors are widely used in various kinds of wearables today, which can perform real-time monitoring of several physiological parameters and movements, such as walking, running, muscle movements, body temperature, etc. They are much more compact, easier to use, and have a much faster response time.

A flexible sensor consists of three basic components: a substrate, active element, and electrode/interconnect. A substrate is the main source for flexibility and stretchability of wearable sensors and directly determines the comfort level and long-term reliability. The common materials used to develop ﬂexible sensors are organic, inorganic, and hybrid polymers such as polyethylene naphthalate (PEN), silicon, and polydimethylsiloxane (PDMS), which have high elasticity, and low dielectric constant, making them lower in cost compared to other ﬂexible substrates.

Among the various fabrication techniques available to produce ﬂexible sensors, some of the most common ones are:

Some of the common types of sensing performed with the wearable, flexible sensors are as follows.

Pressure and strain sensors are the most standardized applications of flexible sensors. Various kinds of piezoresistive and piezoelectric sensors have been developed to date to monitor various physiological parameters using bandages, gloves, etc.

Biomedical signal monitoring is another sector that has been worked up with wearable, flexible electronic devices. Monitoring of metabolites on the skin is done by sensors with ion-electron potentiometric transducers. Oppositely charged multilayered films are used to establish chemoresistive sensors, while the detection of sodium (Na+) and potassium (K+) ions are detected using a sensor designed with Cu/PI flexible electronic layer. Monitoring of saliva is done using graphene nanosensors.

Flexible Organic electrochemical transistors (OECTs) are another type of sensor used for testing saliva by converting biochemical signals to electrical signals. They are developed with a PANI/Nafion – graphene bilayer film. These sensors are also used as pressure sensors and in large-area sensor skins.

Though different techniques and materials are used to construct wearable, flexible sensors, the mass production of these sensors is still challenging due to the existing weakness in cost, fabrication efficiency, and high-performance consistency. Continuous investment in material preparation and fabrication process perfection plays a significant role in constructing cost-effective, consistent wearable flexible sensors.