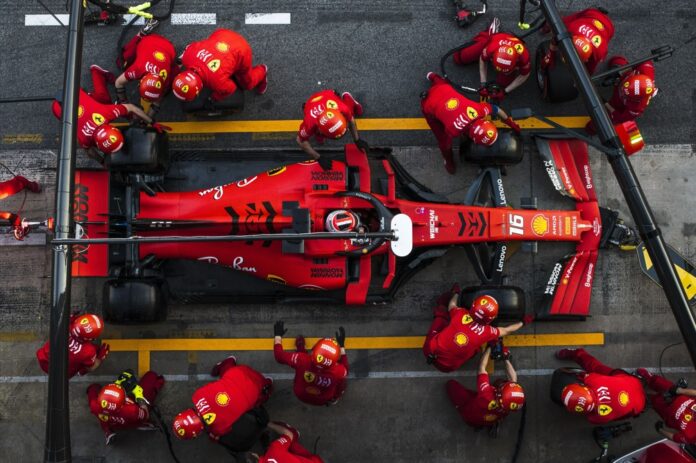 Formula 1 racing has a rocky history with pit stop automation, but is there a chance things could change? Over the past ten years, new automated and robotic tools, such as auto jacks and automatic wheel guns, have slowly entered the racing world. These tools have the potential to transform pit operations, but F1 has remained reluctant to allow automation in the pit.

With other series considering fully robotic next-gen pit crews, could F1 officials ever reconsider? Here’s a look at the current state of robotics in F1 racing and where it could go next.

The State of Pit Crew Automation

Robotic pit crew gear is not necessarily “new” – automated pit tools have been around for a while. Ferrari was the first to introduce automated wheel guns and other automated tools like auto jacks and even trophy-presenting robots that have recently entered the racing scene.

The benefits and issues of these technologies have created divisions between different series. Some, such as Super Formula, allow certain robotic tools. Others, like F1, have stricter bans on the automatic gear in the pit.

Robots are coming to other elements of racing, as well. In 2020, F1 used unique “trophy robots” to present awards to drivers. The robots were used as a safety precaution to reduce the spread of COVID-19. In addition to presenting trophies, the robots performed simple tasks like delivering water bottles or towels.

Similarly, in 2022, F1 trialed avatar robots that allowed fans to remotely explore the race paddocks and interact with drivers. This technology could allow fans in the hospital or with mobility issues to experience races “in person.”

Of course, trophy robots and robot audience members are very different from robots in the pit crew. These robots are mostly around for service roles. They don’t impact race results or a driver’s performance on the track. F1 is much more reluctant to allow any robotic or automated tech in pit operations primarily because they recognize the crucial human element of pit crew performance.

The Human Element of the Pit Crew

It’s important to remember that the pit crew is essentially a team of athletes themselves. Crews compete for the best times or the “perfect” run. A crew’s performance can significantly impact a driver’s performance and may even determine whether he wins or loses. Pit crews have to be well-oiled machines with expertly coordinated movements and timing. Everyone has to know exactly what tools to use and how to use them to get a safe, quick release for their driver.

So, there is a case for protecting the human element of pit stops. Automation would eliminate any variety from one pit to another. It would simply come down to who has the best-tuned robots; one day, even that might be standardized out of fairness. To put this into perspective, imagine replacing drivers with self-driving car algorithms. The human element of racing is what makes it a sport. That applies to pit stops as well as driving.

With all this in mind, it makes sense that F1 leadership would be hesitant to open the door to any robots at pit stops.

The FIA has established ground rules for the automated tech pit crews can use. Far from allowing robots, F1 pit crews are barely even allowed to use auto-wheel guns. F1 rules require that humans lift all the cars and that a human applies the torque for the wheel gun.

Some wheel guns also have a button that can be pressed to signal for the jacks to be released. In the past, wheel gunners would hit this button while the nut was still tightened. This allowed the software in the wheel gun to run its safety checks on the wheel while the wheel nuts were still being tightened. While this cut down time for the pit stop, it also created a serious safety risk by negating the software’s safety features.

New 2021 F1 rules require wheel gunners to wait until after the wheel nuts are tightened to activate that button on the gun. This allows the failsafe safety mechanism on the wheel gun to do its job while leaving room for human performance variation. Still, the robotic elements that are allowed here are extremely limited.

A Question of Safety

Whether or not robots or automated equipment should be allowed in F1 pit stops is a complicated debate. It is worth noting that F1 leadership has good reason to be skeptical about robots at the pit stop. Even today’s minimally automated tools have caused accidents.

Perhaps the most infamous incident was an accident that occurred in 2018 at the Bahrain Grand Prix. Driver Kimi Raikkonen accidentally hit one of his team’s mechanics after an unsafe release, breaking the mechanic’s leg. An investigation into the accident found that a sensor malfunction on the left-rear wheel was the cause of the accident. The sensor was supposed to detect when all wheels were properly attached and autonomously give the driver the green light. The sensor incorrectly gave the green before the final wheel was tightened.

This incident sparked discussion about how much automation should be allowed in the pit lane. A dual sensor system was suggested to resolve the problem that caused the 2018 accident in Bahrain. However, the concern still stands – if automated technology can’t perform a simple task like sensing wheel tightness, how can it be trusted to operate an entire pit stop?

That’s not to say that pit stops will never be automated. The technology simply doesn’t seem to be ready yet. Of course, the fan and critic perspective is worth considering, too. Many people are skeptical about the extent to which F1 pit stop regulations are already in place. A fully robotic pit stop would take regulation to the max by completely removing the human element.

The Shifting Future of Racing

Even if F1 racing will likely keep human pit crews for the foreseeable future, automation is still changing the racing world. Other series are more open to automated and robotic tech at pit stops. Some are even designing fully robotic pit stops.

German racing series DTM announced in 2019 that it was developing designs for a fully robotic pit stop for a new EV series. The concepts for the next-gen pit stop look more like an assembly line than a pit crew. The completely automated pit stop setup is designed for a new breed of race, high-performance electric vehicles.

DTM is trying to evolve motorsports for a future rapidly becoming dominated by EVs. Of course, EVs today are not generally designed to be race vehicles. With its robot pit stops, this new series would need a new generation of race vehicles altogether.

Could this be the future of motorsports? Will F1 pit crews one day be completely replaced by robots? Right now, it seems unlikely, at least in F1. In other series, like DTM’s EV series, robots could take over pit stops very well. However, F1 seems committed to maintaining the human element of pit stops. The extent that robots are likely to turn up in F1 pit lanes is automated safety features, like the duel-sensor wheel detector mentioned above or smart wheel guns.

Even then, the FIA seems to be setting a standard of tight regulations on the automated gear in the pit lane. It will probably be a major change if things ever begin to change. Robotics and automation can be a slippery slope. If F1 ever begins allowing truly autonomous gear at pit stops, the floodgates will be opened, and sooner or later, things will likely turn to a 100% automated pit stop.

In the racing world, robotic pit “crews” are on the horizon. However, in F1 racing, automation at pit stops is tightly controlled and faces strict regulations. These limitations on any kind of robotic tools at pit stops indicate a commitment by F1 to preserve the human element of pit stops. Human pit crews are part of what makes motorsports a sport rather than a bunch of robot cars going around a track. While other series will likely implement more advanced robotic gear at pit stops shortly, F1 racing is unlikely to be among them.