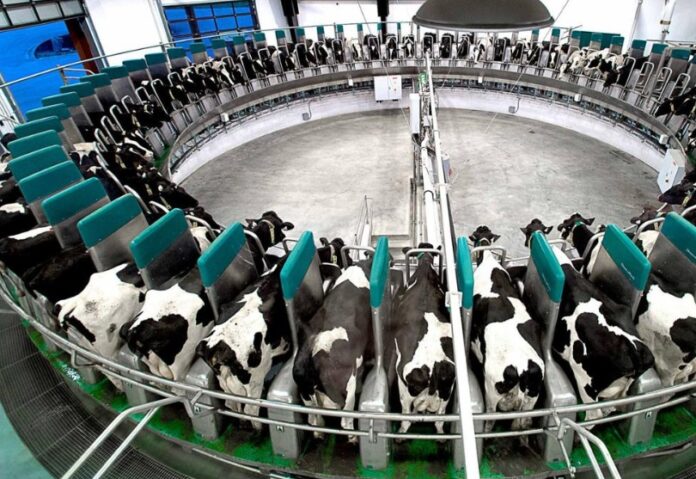 Over the last 100 years, the dairy industry has incorporated technology to maximize yield and profit, and automatic milking systems (AMS) are one of them. They represent a revolutionary innovation in dairy farming, which not only replaces the physical labor required to harvest milk but also influences the entire farm system.

The first milking robots were installed on commercial Dutch dairy farms in 1992. But the real break-through in automated milking came at the end of the 90s. By 2009, an estimated 8,000 farms worldwide had adopted AMS.

The key outcomes of AMS adoption include reduced labor costs associated with milking, high production, and improvements in animal health/condition. AMS has the potential to increase milk production by up to 12%, reduce labor by as much as 18%, and at the same time improve the welfare of dairy cows by allowing cows to choose when to milk.

Although the adoption of AMS has been proved to be beneficial to the farmers and cow alike, challenges exist. In this post, we will discuss some of the key challenges that keep the farmers away from adopting automatic milking systems for their dairy farms.

The current million-dollar price tag of the average robotic milking systems quickly cools down most farmers’ passion for the latest technology. This sticker shock is a major obstacle to a broader acceptance of robotic milking.

Each single-stall AMS that can serve approximately 60 cows is estimated to cost $150,000 to $200,000, depending on the number of milking events the farmer strives to attain for each cow per day. In comparison, a conventional parlor is estimated to cost between $4,000 and $15,000 per milking stall, depending upon the type of parlor.

The conventional parlor price is singular, whereas farmers might need to purchase multiple AMS to accommodate their herd. Furthermore, it is more challenging for farmers to gradually increase the size of their herds with AMS than with conventional milking parlors, as an AMS has fairly strict constraints on the number of cows it can service.

Last, the farmers in countries like the US have more opportunities to find and hire cheap labor than other countries, potentially decreasing some of the appeals of an AMS.

The second reason behind the slow adoption of AMS in the United States is the uncertainty and lack of available service providers to assist with mechanical problems.

Although AMS has the potential to be incorporated on relatively small farms, there is a lack of local, technical support and professional expertise to guide farmers in the incorporation of AMS within whole-of-farm systems.

By its very nature, an AMS consists of more complex and technologically advanced components that require a high level of technical support and are often beyond the scope of most traditional dairy equipment dealerships.

Another challenge in adopting AMS is that dairy managers need to be willing to commit time to train their herds to use the AMS and individual animals as they enter the milking herd and encounter the AMS for the first time. Transitioning a herd from a conventional parlor to an AMS takes approximately 3 to 4 weeks of intense labor to achieve a success rate of 80 to 90% cows using the system voluntarily.

However, the speed of adaptation can vary widely among individuals in the herd, potentially influenced by the coping response, age, and experience. Pre-exposure to the AMS appears to improve the ease of entry into the AMS upon first milking. Regardless of the pre-exposure level, primiparous cows seem to adapt to the AMS more quickly than multiparous cows.

Although freed from the early morning and early evening milking drudgery, a farmer at the robotic facility needs to make routine and availability adjustments. As a trade-off, he must be on call 24 hours a day, seven days a week, in case there is a problem. Perhaps, for most, this is a small price to pay for a generally freer lifestyle. But for others, continuously being on call becomes more than they can bear.

The installation of robot milking can also substantially alter the cow routines and behavioral responses. Dairymen considering robotics are concerned about the culling levels required to make a herd robot-ready. The culling of animals from a dairy herd that doesn’t adapt to the new robotic milking environment is a painful reality associated with the adoption. Studies show that cull rates range anywhere from five to twenty percent.

Regulators are, at the very least, still standing in the way of wholesale acceptance for US dairies. For robotic systems to gain approval for the production of Grade A milk in the US, milking robots must meet the requirements of the Pasteurized Milk Ordinance (PMO) by the FDA.

All states are required to apply the PMO standards in order to be accepted for grade A milk production and freely transport milk from one state to another. Additional requirements may be added by individual states, but the PMO remains the minimum standard.

Contained in the PMO is a list of guidelines, called the 3-A standards that stipulate guidelines for manufacturing equipment for the harvest and transport of raw milk. Other areas of the PMO spell out requirements for teat cleaning and the effective separation of the milking facility from the animal housing area.

The primary challenges posed by these regulations are foremilk inspection, detection of abnormalities, diversion of unacceptable milk, proper and effective preparation of teats prior to attachment, and separation of the milk/wash area from the animal housing zone.

Since no humans are present during the milking process, the robot needs to detect and be subsequently capable of separating abnormal milk automatically. In short, what appears to be a relatively simple exercise gets extremely complex, with regulations stipulated by both the EU directives for milk production and the American PMO.

Multiple differences exist regarding AMS’s potential role in affecting the milk variables and udder health, due to the automatic teat-cleaning and milking cup-attachment processes. Yet the concerns about milk quality and udder health continue to dog the industry.

Several studies have indicated deteriorating udder health among cows after the introduction of AMS. The percentage of cows with a high somatic cell count (SCC) and total bacterial count of milk seems to be higher in AMS farms than conventional dairy farms.

Therefore, maintaining good udder health on AMS farms can be quite challenging. Special attention should be paid to the hygiene management of the milking robot, the cubicles, and the floors in the dairy barn. Notably, most milking robots today are equipped with a variety of sensor technologies to detect mastitis and abnormal milk. Some AMS brands also offer the possibility of measuring the somatic cell count.