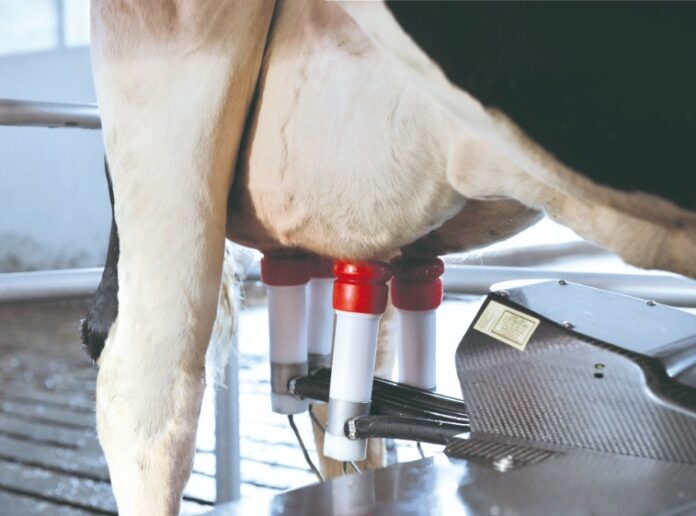 It refers to a system that automates all of the milking process and cow management functions currently undertaken by a mix of manual and machine systems in conventional milking.

Automatic milking systems, which are often referred to as robotic or voluntary milking systems, typically consist of a milking stall or crate with a robotic arm that attaches the teat cups to each cow without human intervention, an electronic identification system and a milking machine, and sensors to assess animal health and milk quality.

AMS makes milking times and milking frequencies more flexible than conventional milking systems, eliminating the need to milk cows at regular set times. It allows the operator to shift their attention to other areas of on-farm management such as feeding animals, insemination, animal health treatments, and calf rearing.

How does AMS work?

Each cow is equipped with a unique electronic identification, enabling the cow to be electronically recognized at gates and in the milking unit. As a cow enters the system, a robotic arm cleans the teats, attaches the milking cups, and sprays each cow’s teats. Each quarter is milked separately, and cups are removed from each teat based on the milk flow, thus minimizing overmilking. Most automatic milking systems can feed grain-based concentrate at each milking.

Single box systems: The most common type of automatic milking system is the ‘single box,’ in which one cow is milked at a time by a dedicated robotic arm in a milking stall, performing all milk harvesting tasks. Every single box can perform around 150 daily milking events, allowing some idle time for cleaning, servicing, and maintaining. Hence, it is best suited for milking about 60 to 70 cows per day.

Multi-box systems: The ‘multi-box’ systems are an alternative to a single box, in which one robotic arm operates across more than one milking stall. Generally speaking, these multi-box systems can milk more cows per robotic arm, but fewer cows per milking stall. The robotic arm is usually idle for less time because it can move on to attend another cow in another stall once it has attached milking cups to a cow in one particular stall. In general, this has an advantage from the point of view of capital costs. Flexibility in these systems means they can start with one robotic system per milking stand and expand up to five milking stands per robotic arm, in some cases, according to farm system requirements.

What CAN an AMS do?

What CAN an AMS NOT do?

What are the benefits of AMS?