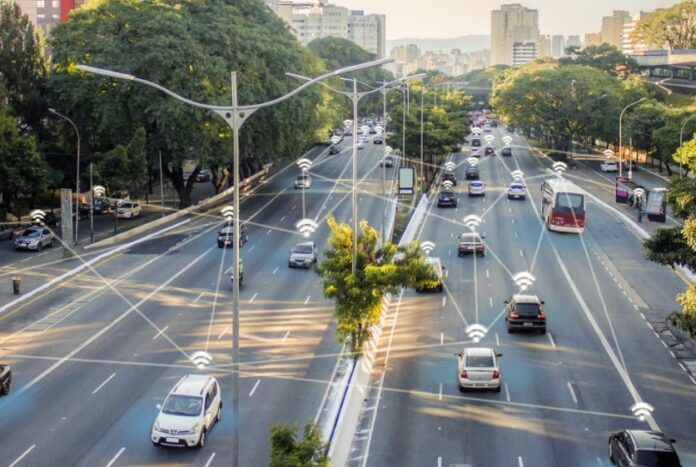 Autonomous vehicles are currently in development and testing stages with several leading companies fine-tuning their Level 4 pilot projects in all conditions. To become widely commercially available, reliable, and affordable, however, the AV technologies need to go through several more stages.

First, all autonomous vehicles being tested today rely on clear pavement markings and legible signage to stay in their lanes and navigate traffic. Major highways and side roads in urban and rural settings will need to accommodate autonomous vehicles in addition to a large fleet of conventional vehicles with human drivers.

Autonomous vehicles may require new roadway design features such as improved lane markings, signs designed to be read electronically, and wireless repeaters in tunnels to provide internet access. Autonomous driving may allow narrower traffic lanes, but large reductions are only feasible on special lanes limited to car traffic to accommodate trucks and buses. As autonomous vehicles become more common, governments will be asked to dedicate highway lanes to their use, to allow platooning. Similarly, autonomous vehicles could eliminate the need for traffic signals, but this is only feasible in areas where all vehicle traffic is autonomous. Governments may need to establish more HOV priority lanes to encourage shifts from lower- to higher-occupancy vehicle travel on congested corridors.

To facilitate vehicle sharing, cities will need to manage curbs to provide convenient passenger loading and unloading. This involves providing passenger loading areas or managing on-street parking to increase turnover, so at least one unoccupied space is usually available near every destination.

Autonomous vehicles will affect future parking demands in many ways. They will require special parking facilities with electric charging stations and vehicle cleaning and maintenance services. Optimists predict that autonomous vehicles will significantly reduce parking demands and costs. A shift from private to shared vehicles can reduce total vehicle ownership and parking needs, and private vehicle owners may program their cars to return home after dropping off passengers.

However, that will increase traffic problems and add delays and uncertainty when passengers could be picked up. Most travelers will probably want their vehicles to be available within a few minutes, which will require parking within a mile or two of their destination. This may allow more off-site and shared parking, reducing but not eliminating urban parking demands.

In this transition period to more autonomous vehicles, which might last several decades, the Federal Highway Administration (FHWA) in the US is expected to play a significant role in setting standards for all traffic control devices, including signs, road markings, and intersection signals.

In the near term, improvement and better maintenance of pavement markings, signage, and intersection design may be the most helpful steps to guide autonomous vehicles. Inadequate road maintenance definitely affects the pace of autonomous vehicle deployment. Unfortunately, 21% of major U.S. roads are in poor condition, and a road with many potholes or temporary pavement repairs also lack continuous lane markings.

Many minor roads, which are generally the county or municipal governments’ responsibility, lack road edge lines and centerlines, potentially making it difficult for autonomous vehicles to position themselves correctly. Dirt and gravel roads pose particular challenges for autonomous vehicles. They generally have no pavement markings, causing the sensors in the AVs to fail and to detect potholes or edges in low-visibility conditions.

Many of the perceived benefits of autonomous vehicles—reduced vehicle fatalities, congestion mitigation, and pollution reduction—may depend on vehicles’ ability to exchange information with surrounding infrastructure. Closely tied to the need for clearer road markings and signage will be ways in which federal and state transportation agencies develop a standardized method to communicate information to vehicles and motorists about construction, road accidents, detours, and other changes road environments.

The Transportation Research Board (TRB) in the US has been evaluating how states should begin now to plan and develop the types of connected vehicle infrastructure that will be necessary for fully autonomous vehicle deployment. TRB’s research is also focused on how cash-strapped transportation agencies can identify the large investments that will, in turn, be necessary to implement connectivity on top of regular maintenance of highways, bridges, and other traditional infrastructure.

Over a longer timeline, the importance of highway markings may fade as automakers and developers find new ways for autonomous vehicles to navigate, including greater use of sensors, guardrails, and roadside barriers, and 3D maps. If highly detailed mapping is deemed to be one replacement for visual cues such as lane markings, then transportation agencies and automakers may need to develop an open standard so that all vehicles will understand the mapping technology.