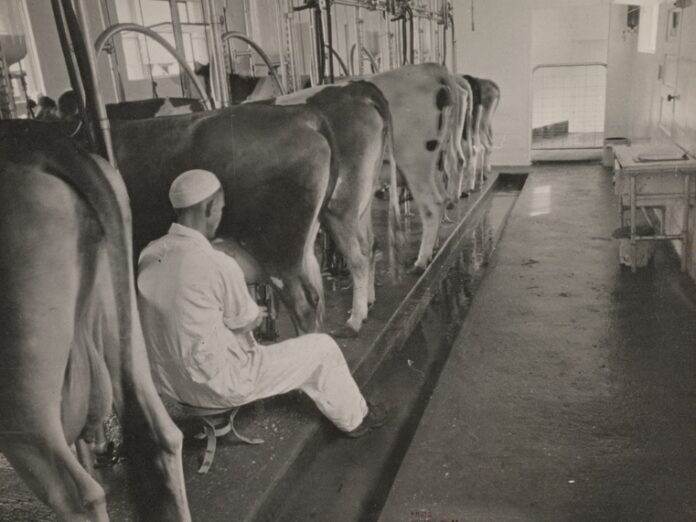 We have been milking cows for thousands of years. Farmers used their hands and a bucket during the earliest days of milking while kneeling on the floor or sitting on a stool.

The basic concepts of milking cows remained unchanged until the dairy industry took off with the steady increase in the milking frequencies over the past 100 years.

Mechanization became necessary to keep up with the demand for milk. The first mechanical milking machine was thought to have been introduced as early as 1870, but it did not become the norm for a few decades. These machines were not anything like the ones we see today. They were excruciatingly painful for cows, and in many cases, caused injuries to the cow and milk contamination.

Other models tried to replicate hand milking (using mechanical pressure), or a calf sucking (using a vacuum). Early versions of this would cause blood to pool in the udder, which injured the cow.

Automatic milking systems (AMS) were designed to replace the labor-intensive machine milking and are an area of rapid development in modern dairy farming. The popularity of AMS lies in the convenience of management, decreasing workloads, and milking consistency compared with non-automated machine milking.

This post will present a short but comprehensive history of milking systems since the 1800s.

1819 – Catheter milking machine first appeared. It was machine tubes made of wood or featuring quills, which could be inserted into the teats, forcing the sphincter muscle to open and allowing milk to ﬂow out of the mammary gland.

1851 – Hodges and Brockenden developed the earliest vacuum machine that used a large gutta-percha cup connected with a hand pump, and was operated by ﬁtting over the entire udder. In the same year, Anna Baldwin developed a similar milker, using a pitcher pump and bucket.

1889 – In Scotland, William Murchland invented a very successful vacuum milker, which hung suspended under the cow.

1898 – The USDA finally tested and gave its approval to a pulsator milking machine.

1898 – The famous Thistle machine was the ﬁrst to incorporate such a pulsator into the design, which combined a steam-driven pump to effect both suction and squeezing movements.

1922 – Herbert McCornack invented the surge milker. This new machine incorporated a tug and pulling motion to the pulsating vacuum of previous milking machines.

1952 – The herringbone milk parlor was invented in New Zealand.

1972 – The Japanese Ministry of Agriculture, Forestry, and Fisheries started developing new technology for labor-saving in milking at the Livestock Experimental Station.

1980 – NEDAP Co in the Netherlands developed an electronic individual identification system and used it for automatic concentrate feeders in free-stall barns. The Federal Research Institute for Agriculture at Kiel in Germany completed some fundamental aspects of an automatic milking system using ultrasonic sensors, a CCD camera, and a laser to locate the teats.

1983 – IMAG-DLO at Wageningen in The Netherlands organized the second symposium, entitled “Automation in Dairying.”

1985 – The first milking cup is attached to a cow using a robotic arm under an experimental setting.

1987 – The third symposium on “Automation in Dairying” was held in The Netherlands. Of 47 presentations, seven concerned the automation of milking, including three from the UK, two from West Germany, one from France, and one from Denmark.

1988 – The research council and the UK Ministry of Agriculture set up a robotic milking project.

1990 – A automatic milking system developed by CEMAGREF in France was tested for a short period.

1992 – The first commercial AMS installed on a farm in The Netherlands. It represented one of the most signiﬁcant technological advances in the dairy industry due to its capability to reduce negative human inﬂuences, such as procedural error and microbiological contamination on the resulting milk quality.

1992 – A Review and Design of Robotic Milking Systems, Mottram, listed the challenges to overcome during milking.

1993 – A report issued by the Silsoe Research Institute outlined the technology used by one prototype milking robot to tackle the attachment problem.

1996 – The milking robot developed by Duvelsdorf in West Germany used a computer database of the positions of the teats, and an ultrasonic sensor and light barrier established the exact position. This system was taken over by Westfalia in Germany in 1996 and named Leonardo.

2000 – Approximately 800 farms worldwide started using AMS. In Japan, the milking robots were testing at four public agricultural experimental stations and were in use at over 20 private dairy farms.

2009 – AMS was estimated to be deployed on more than 8000 dairy farms in over 25 countries worldwide.

2010 – The number of AMS rose to 10000. The first automatic rotary milking parlor was released.