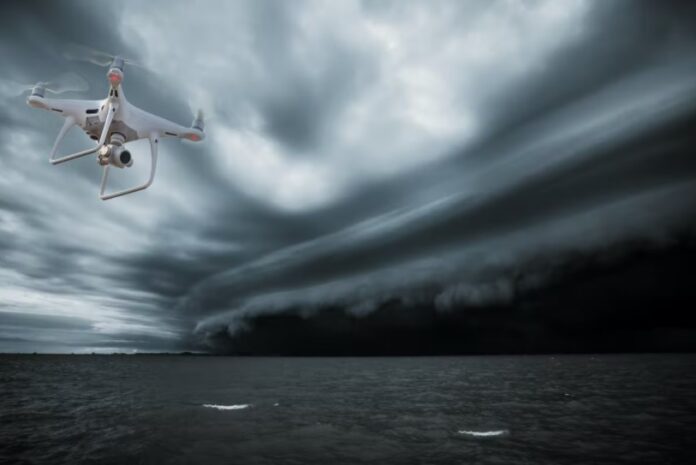 Weather can pose a greater risk to drones, and therefore, you must have extra awareness about how the weather and meteorological conditions can affect your drone and flight.

Drones are sensitive to wind, and several factors, including the meteorological conditions of the flight, affect the drone’s performance. For example, the drone’s size can be crucial to withstanding the wind. The wind usually has a higher velocity at higher altitudes and changes direction more frequently (directional gradient).

The manufacturer has specified a maximum wind speed for each drone. To avoid your drone drifting away in the wind or crashing, make sure you always follow the instructions.

If your drone is carrying a payload and is windy, the center of gravity (CG) settings may change as the weight distribution on the drone shifts. It has the potential to throw the drone off balance and, in the worst-case scenario, crash it. Ensure that the payload is properly fastened to not move during the flight, disturbing the drone system. In addition, the payload means the drone will have more drag, potentially making it harder to move forward.

Always remember that a drone carrying a payload may not be able to fly at the manufacturer’s recommended maximum wind speed.

As a safety measure, the RTH function will be activated on some drones if the system detects that the drone has only just enough power to return home (based on the distance to the home point). But the system’s calculation doesn’t include the force and direction of the wind. In headwinds or strong winds, the drone may struggle to move forward, and as a result, it may not arrive at the home point in time as predicted by the system. It may then land in the wrong place. It may be wise to start on the leeward side of an area if the wind is strong.

Many drones aren’t IP rated (a classification that determines how well an electrical device can withstand dust and water) and are vulnerable to rain, fog, and snow. Also, avoid flying during thunderstorms, as metal parts and batteries in the drone can attract lightning at high altitudes.

According to the manufacturer’s instructions, always check what your drone withstands before flying in humid or wet weather.

Many drones have IR sensors sensitive to water accumulations, snow, direct sunlight, and shiny and reflective surfaces. This may cause the sensors to miscalculate distances, resulting in a crash in the worst-case scenario. In addition, drones often have sensors in the form of cameras, which may be sensitive to moisture. And because visibility is crucial to the function of these cameras, they also perform poorly during rainfall or fog. Radar sensors are less sensitive to wet weather than other common sensor types.

Just like sensors, humans may perceive worse the surroundings in poor visibility. That is a reason to fly more cautiously or not at all in poor weather conditions.

Different drones withstand cold differently. Just as mentioned in previous sections, you should read the instructions from the manufacturer to make sure you are aware of your drone’s capacity – and act according to the instructions.

When flying in temperatures below freezing, there are two important factors to keep in mind:

Ice buildup on the propellers can have serious consequences, as the propellers will be unable to generate the necessary power for safe flight. On top of that, cold batteries have a reduced capacity to supply the drone with energy (the batteries should preferably be heated before the flight). Also, keep in mind that the temperature is usually lower at high altitudes.

Turbulence is caused by moving air that prevents an even flow instead of swirling and fluctuating in force. Several factors can cause disturbed flow. One of them is thermals – columns of rising air occurring when the sun warms the ground, which in turn warms the air directly above it, causing it to rise. However, thermals don’t usually affect drones in the open category to any great extent; above all, it affects manned and unmanned aircraft flying at higher altitudes.

Mechanical turbulence decreases with altitude – there are no turbulence 50 meters above an object. The wind velocity, on the other hand, increases at high altitudes.

How the flight can be affected by different meteorological factors:

Regardless of which category you fly in, you must check the weather forecast for the period you plan to fly and be aware of your drone’s limitations before each flight.