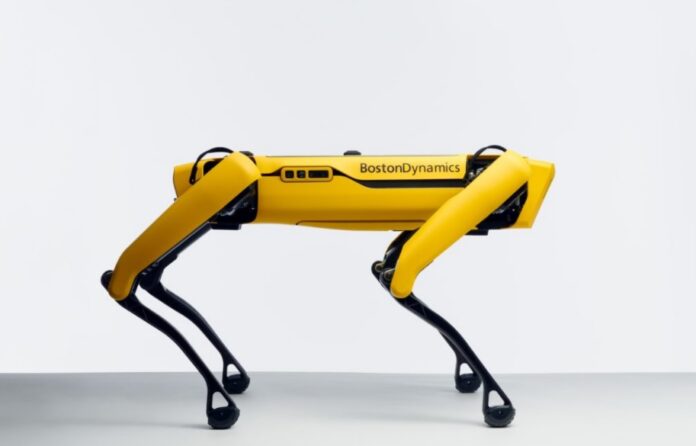 While robots with industrial applications have traditionally been either wheeled mobile robots or manipulators, advancements in artificial intelligence and autonomous machines have led to a significant boom in the creation of biologically inspired robots—specifically, quadruped robots (or four-legged robots or robot dogs).

The four-legged design of quadrupeds offers a more dynamic system in terms of stability, control, and speed in comparison to other mobile robots, such as bipeds. Today’s quadrupeds can climb stairs, carry heavy payloads, jump and hop, and navigate dangerous or unstructured terrains autonomously. Because of this, they have presented some innovative solutions to the limitations of traditional robots and have opened the door to new possibilities in how they might be applied in industrial environments.

Quadrupeds’ ability to operate in a wide variety of unstable terrains makes them ideal for performing dangerous tasks in environments that, up until now, have been performed by human workers. From monitoring remote, high-risk environments to autonomously navigating complex construction sites, quadrupeds are incredibly useful for functioning in hazardous or inaccessible areas without putting human life at risk.

With the rise of quadruped robots, several models have been put on the market and continue to undergo ongoing research and development. Read on for some of the most popular quadrupeds available today.

Boston Dynamics has become known as the leader in the quadrupedal robotics market, largely due to their robo-dog Spot, which was first developed in 2016. Spot is a nimble quadruped significantly smaller than their previous models, weighing just 160 pounds. Spot can successfully explore rocky and uneven terrains, avoid objects in its path while traveling, and even climb stairs and hills.

While Boston Dynamics has gained notoriety as leading the development of quadrupeds, Swiss robotics company ANYbotics deployed its version of the robotic dog in 2016. Designed specifically for industrial inspection tasks in energy or industrial plants, ANYmal is equipped with powerful visual and thermal cameras, remote panning and tilting settings, and 360-degree scanning capabilities.

Since its introduction in 2016, ANYmal has undergone several development iterations, and ANYbotics is in the process of creating an upgraded version designed specifically for explosive environments.

One of the latest quadrupedal robots designed by Ghost Robotics, Vision 60, is a semi-autonomous robot dog that has recently been tested at the U.S. Air Force’s Scott Air Force Base in Illinois as part of its one-year pilot testing program. Built to combat risks faced by Air Force pilots, Vision 60 is equipped with a mounted rifle on its back and improved sensors that allow it to operate in all kinds of terrains. Experts in the field have future ideas for Vision 60’s use in supplementing a bomb team or leading a foot patrol.

The market for quadrupedal robots might be in its early stages, but their interest has skyrocketed thanks to their capabilities in various fields. To learn more about the evolution of robo-dogs and their various applications, check out this animated visual from the Panda Security team below.