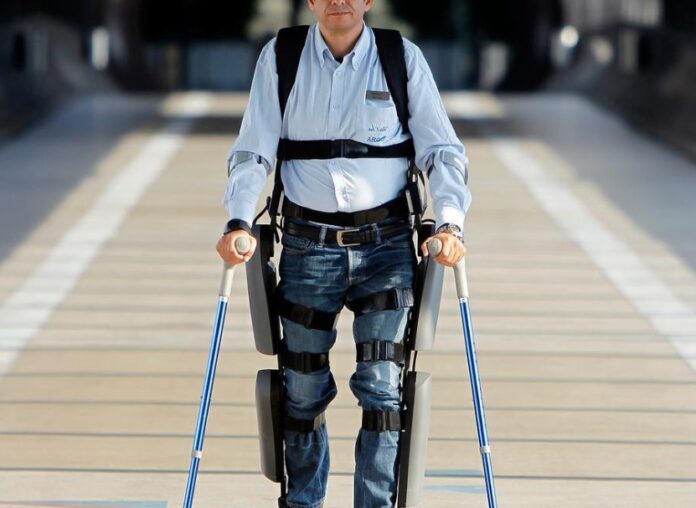 Since rehabilitation robots work near humans, safety is an inherent challenge that includes the occupational safety of the therapist and the safety of the patient, who is strapped to the powerful machine.

Normal forces and pressures are unavoidable and even intended at human-robot interfaces like the contact area between the patient’s skin and a cuff or harness. When a strap is tightened around a body part, circumferential pressures form and local pressure areas form where the robot’s forces are transmitted through soft tissues, and gravity acts on the patient’s body weight supported by the robot.

High pressures at the physical human-robot interface can obstruct blood flow or compress tissue, resulting in bruises and other injuries. Over bony prominences, where local pressure peaks occur, pressure injuries are common. Pressure ulcers can be caused by prolonged exposure to pressure or pressure combined with shear. As a result, pressure direction, distribution, and duration are critical factors for comfort and safety.

In addition to pressures, shear forces are frequently present at the interface between skin and robotic devices. The robot’s movement applies multidirectional forces to the human, transmitted through the soft tissue, especially in dynamic situations. Furthermore, when the robot kinematics differ from the human kinematics, shear forces and slipping at the connection points between humans and robots can occur. As a result, the exoskeleton segments are too long or too short in certain joint positions.

Soft tissue and cuff compliance can compensate for a portion of the mismatch. Nonetheless, shear forces, torques, and cuff material slipping on the skin can cause soft tissue injuries or discomfort. The amount of pressure applied to soft tissues, the contact area between the skin and the robot’s attachment surface, and the friction coefficient of the robot’s surface material with human skin influence the shear stress that develops.

Clothes worn beneath the robot cuff can affect this interaction by adding another layer of friction coefficients between the cuff material and the skin. The coefficient of friction is influenced not only by the material but also by skin conditions like humidity and topography. As a result, the material used at the human-robot interface influences how the robot attachment interacts with human soft tissue. Blisters can form when there is a lot of friction on the skin.

Exoskeleton joints are always simplified representations of human joints, resulting in unavoidable misalignments during movements. Furthermore, unlike customized medical devices such as orthoses and prostheses, robotic rehabilitation devices are typically one-size-fits-all solutions that can be worn by users of a variety of body shapes and heights.

Straps and segment lengths can be adjusted, but the device is not custom-made for each patient and is typically used by several patients per day in rehabilitation settings. As a result, adjusting and fitting are critical to reducing the risk of injuries caused by misalignments before each training session.

While misalignments are uncommon in exoskeletons, the risk of exceeding the normal range of motion is relatively easy to avoid because the movements of the patient’s limb segments can be derived from and controlled by the movements of the exoskeleton segments. However, one must keep in mind that the user’s range of motion may vary depending on patient-specific conditions or training goals and thus must be patient-configurable. A serious hazard associated with end-effector-based rehabilitation robots is arbitrary movements that apply excessive forces to the patient and cause a joint to exceed its normal range of motion.

In addition to the risks to the patient using a rehabilitation robot, bystanders and other types of users, such as the physical therapist, must be considered. The therapist has been specially trained to work with the rehabilitation robot. However, dangerous situations can arise when the therapist supervises the training close to the robot. A collision, for example, could result in an injury to the therapist due to an impact or clamp between two robot segments or between a rigid object such as a wall and the robot.

Wearable robots for assistive purposes could be used in the home or other uncontrolled settings like parks or shopping malls. Bystanders, including children and pets, are untrained in dealing with robotic devices in these situations and may act unexpectedly, such as moving into the robot’s path or pushing a finger into one of the robot’s openings. Developers of rehabilitation robots must consider these dangerous situations and use power and force limiting functions to prevent injuries.