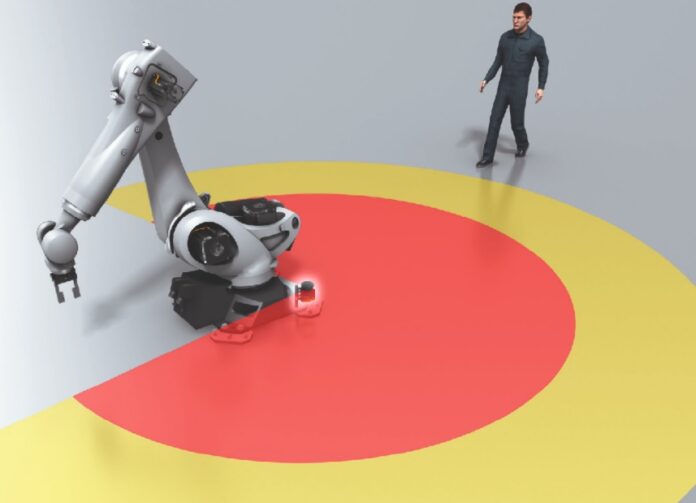 It is said that robots take over hazardous jobs, but at the same time, new risks are involved. One thing that must be kept in mind is that a robot is a type of automatic machine – a very sophisticated one, but a machine nevertheless. It has to be treated with respect like any other piece of equipment.

Accidents involving robots can happen just as with other machinery. The robot workplace must be watched to prevent operators from hurting themselves through carelessness, exactly as with other automated machines. Robots, however, may need more attention since their workspace is much larger than the occupied floor space, and people may not be aware of the danger of the moving manipulator.

Some of the possible ways the accidents can happen are as follows: (a) The arm of a robot suddenly shot up as the oil-pressure source was cut off after the robot ended work. (b) A robot made a motion that was not part of its program. (c) Although its interlock conditions were still not ready, a robot started moving as soon as its power source was switched on. (d) When operating alone, a robot destroyed the work to weld because of a mistake in program instruction. (e) A robot’s arm sprang up during hot summer weather, although it had otherwise been working normally.

Safety measures for using robots must be imposed for the following reasons:

To take care of the issues arising out of the above reasons, the following three aspects must be looked into :

While the first aspect depends on the robot manufacturer, the other two must be taken care of in the plant itself. The following guidelines can help to eliminate potentially dangerous situations for robot operators, factory workers, visitors, and the robot itself:

(a) Permanent barriers (e.g., fences, rolls, and chains) should be placed around the robot’s working area to prevent people from entering while it is working. The envelope diagram of the robot should be used to plan the barriers. A fence-type barrier has the advantage of being able to stop apart from being released by the robot’s gripper while it is in motion.

(b) The robot control should be interlocked with the access gates to the robot’s closed working area. The robot system is automatically turned off when such a gate is opened.

(c) When the robot is turned on, an illuminated working sign stating “robot at work” should be turned on automatically. When the robot is switched off, this lighted sign warns visitors not to enter the closed area even if it does not move.

(d) On the robot’s teach box and control console, emergency stop buttons must be placed in easily accessible locations. When you press the emergency button, the motors are turned off, and the brakes on each joint are applied.

(e) Pressure-sensitive pads can be put on the floor around the robot that, when stepped on, turn the robot controller off.

(f) Emphasise safety practices during robot maintenance. In addition, the arm can be blocked up on a specially built holding device before any service work is started.

(g) When using the manual reaching mode, extreme caution must be exercised. The reach box must be designed so that the robot can move as long as the operator’s finger presses a switch. All robot motions must come to a halt when the finger is removed.

(h) The electrical and hydraulic installation of the robot meets proper standards. This includes ensuring that the robot’s body is properly grounded. Electric cables must be placed where the robot’s movements will not be damaged. This is especially important when the robot is carrying electrical tools like a spot-welding gun.

i) Power cables and signal wires must not create hazards if they are accidentally cut during the robot’s operation.

(j) When a robot collaborates with an operator, such as when a robot forwards parts to a human assembler, the robot’s arm must be programmed to extend to its maximum length when forwarding the parts, allowing the worker to stand beyond the reach of the arm.

(k) Mechanical stoppers, interlocks, and sensors can be added to limit the robot’s reach envelope when the maximum range is not required. Suppose a wall or a piece of machinery not served by the robot is located inside the reach envelope. In that case, the robot can be prevented from entering this area by adding photoelectric devices, stoppers, or interlock switches in the appropriate spots. There are robots supplied when adjustable mechanical stoppers for this purpose.

Another approach states that only robots themselves can detect the approach of humans. Therefore, the solution to the safety problem is to provide a sensor system that can detect intruders entering the robot area while it is in motion.

Level I: Perimeter penetration detection around the workstation

Level I systems provide perimeter penetration detection around the robot workstation. These systems alert you when an intruder enters the workstation, but they don’t always provide information about where the intruder is within the workstation. The most basic safety strategy approach might be to use the level I system to warn personnel that they are about to enter a robot workstation and should proceed with caution, or to send a preliminary signal to the robot control system to check the status of other safety sensors.

Level II systems detect activity in the area between the workstation perimeter and a point on or just inside the robot’s working volume. The exact boundaries of this region are determined by the layout of the workstation and the safety strategy used for a specific robot design. It may be permissible for personnel to be inside the workstation and possibly even inside a portion of the robot’s accessible working volume while operating in some cases. In some cases, it may be necessary to slow down or stop all robot movements as soon as an intruder approaches a certain distance.

Level III systems detect objects within the working volume of the robot. When personnel must work close to the robot, such as during teach-mode operations, this type of system, also known as a safety skin, is required. Even if someone is within the working volume, the robot must be operational in such cases. In the event of an unexpected movement, the level III system must be capable of sensing and avoiding an impending collision between the robot and the operator. Because the distance between the robot and the operator is much shorter in this case, the level III safety system’s response time must be significantly faster than the level I or II systems. These smaller separation distances also require finer distance-resolving capabilities in the Level III system.