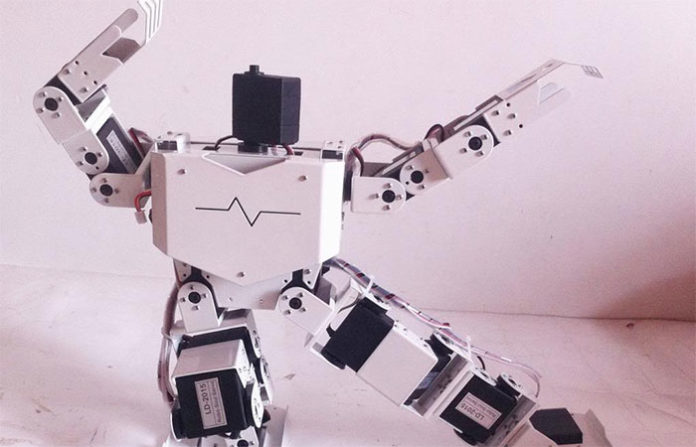 A sensor is a window for a robot to the environment. Sensors allow robots to understand and measure the geometric and physical properties of objects in their surrounding environment, such as position, orientation, velocity, acceleration, distance, size, force, moment, temperature, luminance, weight, etc.

Sensors are defined by various properties that describe their capabilities:

Sensors are used in robots for a variety of tasks. A greater use of sensors, therefore, is highly essential to avoid uncertainty and achieve higher productivity. In this post, we will briefly discuss seven common sensors used in robots.

A light sensor detects light and creates a difference in voltage. A robot’s vision system has a computer-controlled camera that allows the robot to see and adjust its movements accordingly. The two primary light sensors in robots are Photoresistor and Photovoltaic cells. Other light sensors like phototubes, phototransistors, CCDs, etc. are rarely used.

a) A photoresistor is a type of resistor whose resistance varies with light intensity changes; more light leads to less resistance, and less light leads to more resistance. They can be easily implemented in light-dependent robots.

b) Photovoltaic cells convert solar radiation into electricity. This is especially helpful when planning a solar robot. While the photovoltaic cell is considered as an energy source, a smart implementation combined with transistors and capacitors can convert this into a sensor.

2D & 3D Vision: A standard 2D machine vision image is flat, calibrated to measure length and width, but does not provide any height information. 3D vision allows a robot to detect the orientation of a part that needs handling more effectively, even if the location and position of the components vary. A 3D vision system can accurately guide a robotic arm during assembly, while a robotic arm can provide multiple viewing angles for critical assembly inspection.

Sound sensors are generally a microphone used to detect the equivalent voltage of sound and return. The sound it receives can be navigated by a simple robot. Imagine a robot turning right to a pulpit, turning left for two palpitations. Complex robots may use the same microphone for voice recognition. Sound sensors are not as easy as light sensors because sound sensors generate a minimal voltage difference which should be amplified to produce a measurable change in voltage. Voice systems also use robots with voice commands. This is useful if the trainer has to handle other objects when training robots.

The nearby object can be detected by a proximity sensor without physical contact. The transmitter transmits electromagnetic radiation in the adjacent sensor and receives and analyzes the interruption feedback signal. Thus, the amount of light received in the area can be used to detect the presence of nearby objects. The sensors provide a collision avoidance method for the robot.

There are various types of proximity sensors, and only a few of them are usually used in robots.

Infrared (IR) transceiver: An IR LED transmits an IR light beam that reflects the light captured by an IR recipient when an obstacle is found.

Photoresistor: Photoresistor is a light sensor, but it can still be utilized as a sensor of proximity. If an object approaches the sensor, the number of light changes, which changes the resistance of the Photoresistor. This is detectable and processable.

Tactile Sensor is a device specifying an object’s contact. Often used in everyday objects such as elevator buttons and lamps, which dim or brighten by touching the base, a tactile sensor allows the robot to touch and feel. These sensors are used to measure applications and gently interact with the environment. It can be sorted into two principal types: Touch Sensor and Force Sensor.

a) Touch Sensor or Contact Sensor: Touch Sensor is capable of sensing and detecting sensor and object touch. Some of the commonly used simple devices are micro-switches, limit switches, etc. These sensors are mostly used for robots to avoid obstacles. When these sensors hit an obstacle, it triggers a task for the robot, which can be reversed, turned, switched on, stopped, etc.

b) Force Sensor: Force sensor is included in calculating the forces of several functions, such as machine loading & unloading, material handling, and so on, performed by a robot. This sensor will also be a better assembly process to check problems.

Positioning sensors are used to approximate the position of a robot. The usual positioning sensor is a GPS (Global Positioning System). Satellites orbiting our Earth transmit signals, and a robot receiver acquires and processes these signals. Use the processed information to determine a robot’s approximate position and velocity.

Digital Magnetic Compass provides directional measurements using the Earth’s magnetic field that guides your robot to reach its destination. Compared to GPS modules, these sensors are cheap, but a compass works best when you need both positional feedback and navigation. Another method called location refers to the task of automatically determining a robot’s location based on external elements such as natural and artificially placed landmarks such as doors, windows, walls, etc.

An accelerometer is a device for measuring acceleration and tilt. The two types of forces affect an accelerometer: a) Static Force — the frictional force between any two objects. By measuring this gravity, we can determine how much robot tilts. This measurement is useful in balancing robot or determining whether a robot is driving on a flat or uphill surface. B) Dynamic Force — The acceleration required to move an object. Measuring dynamic force using an accelerometer tells the speed/speed at which a robot moves.