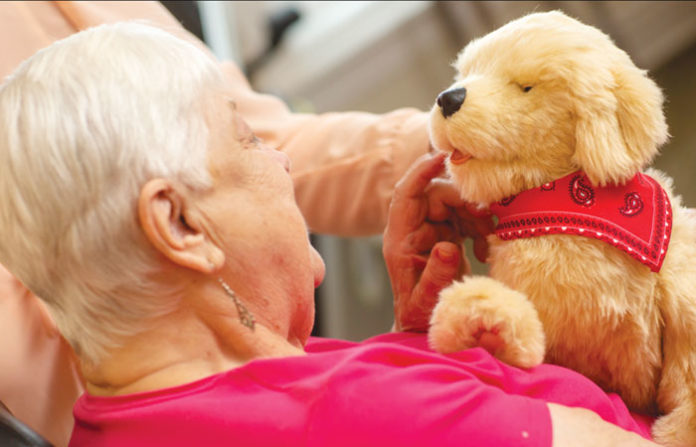 A pet can provide a variety of health benefits, including reduced blood pressure, cholesterol, and loneliness to boost exercise and socialization opportunities. Studies show that a robot pet can also have the same health benefits. Robotic pets are artificially intelligent machines, made like an animal commonly kept as a pet.

Although most people see robots as cold, unfeeling machines, more and more people use robots for companionship and therapy. Since their early days in the 1990s, robotic pets have become more popular, and some recent models are more sophisticated than their predecessors, in terms of design and AI capabilities.

In this post, we have listed the top 5 pet therapy robots you should know.

Tombot is a pet therapy robot and the most realistic robotic animal in the world, created to help patients, seniors, people diagnosed with dementia, and animal lovers who can’t have a live pet. It can emulate the appearance of a live puppy and offer the kind of unconditional love a dog can give — the golden labrador retrievers barks, wags, and responses to touch, providing emotional support.

Tombot Puppy’s newest design is a prototype named Jennie. The line of Jennie robots is expected to be available for purchase on May 2020 and will cost $450, per Tombot’s Kickstarter page.

Paro is a famous responsive, animal-inspired robot from Japan’s AIST that looks like a white-eyed baby harp seal. This advanced interactive robot provides stress-relieving aid as a form of animal therapy. Paro has five types of sensors: tactile, light, hearing, temperature, and posture sensors with which to perceive people and their environment.

Built to seek eye contact actively, remember faces and even learn how to learn best to respond to a new name, Paro is the 8th generation of a design used in Japan and throughout Europe since its first introduction in 2003 to soothe people with Alzheimer’s disease and dementia. It was shown to dramatically reduce stress in patients and was even certified by Guinness World Records.

3. Hasbro’s Joy for All pets

Joy for All is a realistic pet brand, created by toymaker Hasbro to bring joy, companionship, and happiness to aging loved ones. Marketed explicitly toward those with Alzheimer’s disease and Dementia, Hasbro’s products are meant to imitate lifelike animal behavior.

Hasbro offers two different robot models: a cat available in orange, gray, and creamy white, and a golden dog. The pet cat looks, feels, and sounds like a real cat. It does not walk, but thanks to built-in sensors, it blinks, purrs, meows, washes its face with its paw, and even rolls onto its back for a belly rub. The dog has a thumping heartbeat and responds to its user with puppy-like responses. It nuzzles, moves its head back and forth, and barks in response to human voices.

In November 2017, scientists at Brown University had received a $1 million grant from the National Science Foundation in order to collaborate with Hasbro, with the objective of adding AI, machine learning and computer vision to the “Joy for All” robots. The project aims to enable the robots to identify and keep track of important objects around the house. It could help the elderly remember important tasks and events and enhance safety.

Sony’s friendly robotic dog is another most sophisticated domestic robots around. It has an image-recognition camera on the nose, a time-of-flight sensor on its mouth to detect its proximity to nearby objects, a motion sensor on its belly and a ranging sensor. There are touch sensors in its forehead, lower jaw, and the back of its neck; a light sensor and mapping camera near the base of its tail; and four microphones in its cheeks. It stores its memories in Sony’s AI engine, which is powered by Amazon Web Services. Like a real dog, it barks at strangers, plays with bones, and bothers you while you watch TV.

The latest version of this long-run series of pet robots has come a long way since it was first released in 1998. After a brief hiatus between 2014-2017, Sony announced its latest generation model, ERS-1000, launched in Japan on January 2018.

Leonardo is a social robot that looks like a cross between Gizmo from The Gremlins and a cute little puppy. Designed to be expressive and communicative, it has an AI system that allows it to learn from natural interactions with people.

It is equipped with visual and learning systems based on infant psychology and is capable of tracking faces and objects and recognizing people. This cute animal robot can also build an emotional connection with its owners. The robot was developed by Personal Robots Group in collaboration with Stan Winston Studios.