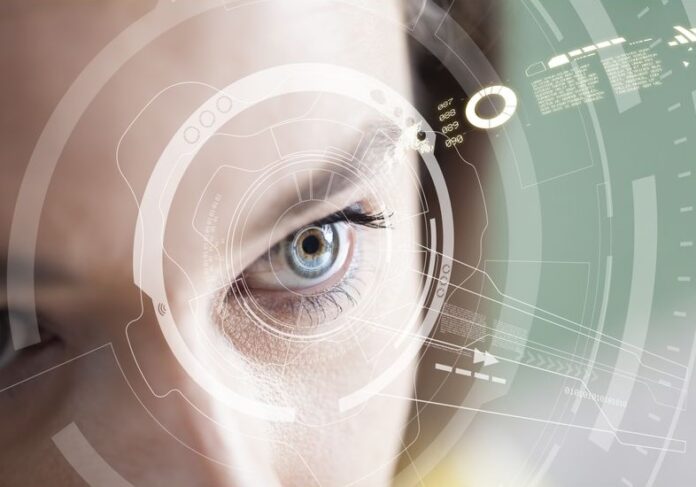 Iris Recognition is the most reliable and accurate biometric identification system available today!

You can see it very commonly used in futuristic electronic devices like smartwatches and smartphones and security purposes like passports, aviation security, and controlling access to restricted areas at airports, database access, and computer login.

Iris recognition identifies a person in real-time by analyzing the random pattern visible within the iris, a muscle in the eye that regulates the size of the pupil, controlling the amount of light that enters the eye. Iris is the color portion that gets its color based on the amount of melatonin pigment within the eye muscle.

From birth, the pattern in the retina remains unchanged till your death, so the iris biometric is one of the most secure access controls in terms of security. In fingerprint biometric, a person’s finger can change its size/form over time, which can easily lead to false acceptance.

How does it work?

Iris recognition involves two stages: enrollment, a process of scanning the pupil for the first time and storing it in the database/cloud/device as reference for the future authorizations, and verification, a process of cross-checking the database and then authorizing the personnel if the data matches. If the verification fails, the system will show an error log or ask the personnel for enrollment.

A typical iris scanner scans the retina with the help of CCD (Charge Coupled Device) digital camera and takes a clear, high-contrast picture of a person’s iris using both visible and near-infrared light. In the presence of near-infrared light, the pupil becomes black, making it to isolate the pupil and iris, so that the iris pattern can be used for matching purposes.

After the iris isolation, it is converted into a digital format to be analyzed in the iris detection process with Modified Canny Edge Detection Algorithm. This involves five steps:

Then comes the next step called Normalization, in which the final edges are normalized to enable the generation of the iris code and their comparisons. The normalization process involves unwrapping the iris and converting it into its polar equivalent. It is done using Dagan’s Rubber sheet model.

In the next phase called feature extraction, Haar Wavelet Decomposition is used to derive the unique characteristics of the iris. This process decomposes the image into four coefficients: Horizontal, Diagonal, Vertical, and Approximation. This process is continued for five-level. The coefficient of the last level is combined to form a vector and converted into binary form. This allows the scanner to compare the data in the database and query image, and grant the access by passing the binary value.

The final step is called matching, where the hamming distance approach is used to compare the iris code generated for the database and query image. The difference between the two codes is counted, and the number is divided by the count. This matching score is provided as input that generates a final matching score.