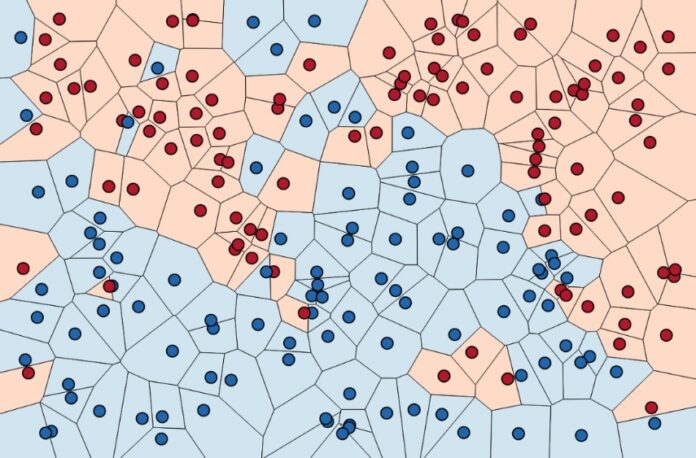 KNN classifier can classify unlabeled observations by assigning them to the class of the most similar labeled examples. KNN groups the data into coherent clusters or subsets and classifies the newly inputted data based on its similarity with previously trained data. The input is assigned to the class with which it shares the nearest neighbors.

For example, fruit, vegetable, and grain can be distinguished by their crunchiness and sweetness. To display them on a two-dimension plot, only two characteristics are employed. In reality, there can be any number of predictors, and the example can be extended to incorporate any characteristics. In general, fruits are sweeter than vegetables. Grains are neither crunchy nor sweet. Our work is to determine which category the sweet potato belongs. In this example, we choose the four nearest food kinds: apple, green bean, lettuce, and corn. Because the vegetable wins the most votes, sweet potato is assigned to the class of vegetables. In this example, you can see that the key concept of kNN is easy to understand.

As explained earlier, the K-nearest neighbors (KNN) algorithm uses ‘feature similarity’ to predict the values of new data points, meaning that depending on how closely the new data point resembles the points in the training set, a value will be assigned to it. We can understand the working of the algorithm with the following steps:

KNN can be used in the banking system to predict whether an individual is fit for loan approval or does an individual have characteristics similar to defaulters. KNN algorithms can also be used to find an individual’s credit rating by comparing with the persons having similar traits. In politics, with the help of KNN algorithms, we can classify a potential voter into various classes like “Will Vote,” “Will not Vote,” etc. Other areas in which the KNN algorithm is used include Speech Recognition, Handwriting Detection, Image Recognition, and Video Recognition.