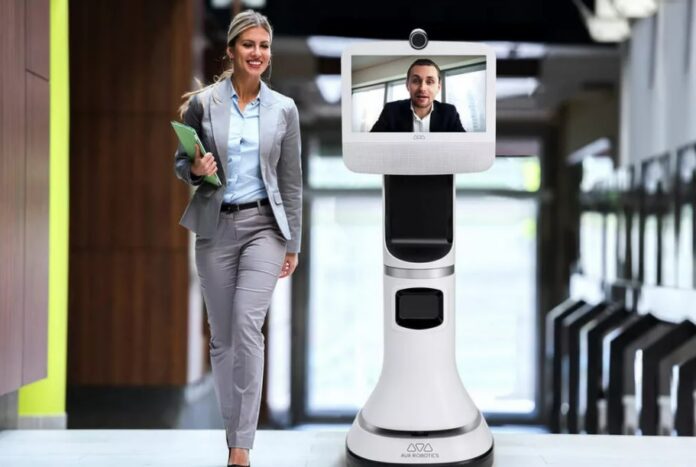 Telepresence refers to technologies used to create a sense of physical presence at a remote place. Telepresence robots allow human operators to be virtually present and interact remotely through robot mobility and bidirectional live audio and video feed. Recently, there has been a growing interest in developing telepresence robot systems for older adults’ wellbeing.

Generally, two types of telepresence robots can be distinguished within the healthcare service robots (HSR) category, based on the user, the remote environment where they function, and the stakeholders interacting with the robot, namely Remote Inpatient Care (RIC) and Remote Outpatient Care (ROC).

Remote Inpatient Care (RIC): The doctor is the primary user in RIC, using the robot within the hospital environment and interacting with nurses and patients. This telepresence robot is mainly used for consultations and check-ups during hospitalizations.

Remote Outpatient Care (ROC): In ROC, while the doctors remain the primary user, the remote environment in which the robot functions is the non-clinical environment (e.g., the patient’s home). Besides the doctors and patients, the robot also interacts with the caregivers that surround the patients.

Telepresence robots’ ultimate goal in healthcare is to provide specialized healthcare services over long distances, thereby bridging the physical gap between the medical professional and the patient. Telepresence robots can bring specialists and experts to remote areas where these services are currently unavailable.

Telepresence robots in healthcare can proactively and socially engage with users, interacting with the person to give assistance and support in certain activities of daily living (ADL) and care. They can be used for social interaction with other people (e.g., family members, friends, doctors, or caregivers) and help the elderly overcome social isolation and loneliness, affecting their physical, mental, and emotional health.

Telepresence robots lower healthcare-related costs and inconvenience and provide better access to crucial healthcare-related information. Besides, these robots can collect medical data about patients’ vital signs that are important for doctors and caregivers.

The social restriction due to COVID-19 created an opportunity for technologies like mobile telepresence robots (MTR) to reduce isolation and its impact on senior citizens. These robots, equipped with digital screens, cameras, microphones, and loudspeakers, can create a connection between two distinct environments and set up social interactions between two individuals located in separate settings. In this way, telepresence robots reduce the risks of transmitting infectious diseases between humans. The most prominent reported use was for healthcare telepresence, including teleoperation by doctors and nurses to interact with patients for diagnosis and treatment.

Like other healthcare service robots (HSR), telepresence robots’ functions are not limited to healthcare but widely cover business and educational environments for videoconferencing or other commercial activities. They’ve been designed for office settings, schools, research, and healthcare.

People with physical or cognitive disabilities can use telepresence robots as social assistive robots. Indeed, they can interact with users to improve their physical and psychological wellbeing by encouraging them to participate in communication, movement, domestic tasks, and health monitoring. Some of them may also include a collection of services that make daily life easier, either by compensating (reminders of appointments, tasks), providing cognitive stimulation (exercise programs), or enhancing safety (calling of family or help providers in case of a fall).

Telepresence robots allow users to communicate with their friends and family and access leisure activities (cooking, yoga, or wellness workshops). They can be programmed to respond to voice commands, allowing the user to direct the robot to move around the house or remind them of appointments.

Telepresence robots have not been well integrated into practice despite the potential benefits. Researchers have identified several technical, organizational, sociological, and ethical barriers to telepresence robot implementation and use in nursing homes. For example, some users were hesitant to use these robots because of difficulties resulting from complex interfaces and a lack of experience manipulating them. They feared that if these tools became widely used, they would reduce real human interactions. Overcoming these barriers is necessary to ensure proper adoption and implementation of these technologies into geriatrics care pathways.