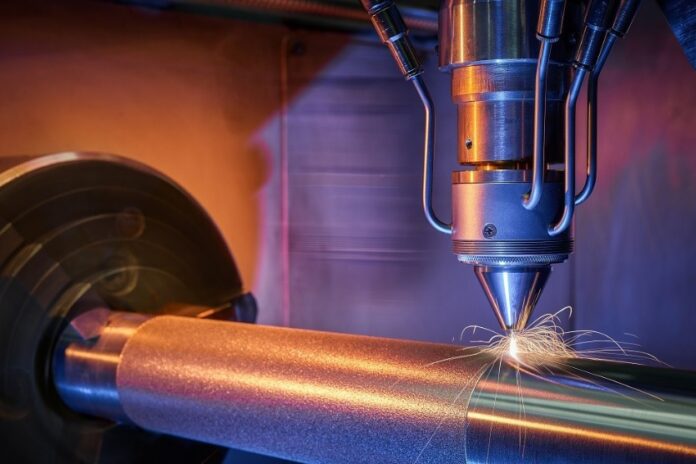 Since its inception in the early 60s, the laser has progressed from laboratory curiosity to a sophisticated industrial tool. Laser is used as an intense, controlled heat source in the manufacturing industry.

In laser, heat is produced by the absorption of the laser photons, and the power density of a laser beam is around a billion times more than that produced by ordinary light.

The key advantage of laser processing is its ability to produce a better quality product with minimum distortion at a high rate, which is an important production requirement.

One of the most recent applications of laser in material processing is the development of small, complex, and intricate components by coupling laser with computer-controlled positioning stages and computer-aided engineering design. The advantages offered by these techniques include the capabilities to produce components of intricate shape with greater accuracy, faster processing speed, the economy in energy and material consumption, etc.

Benefits to using laser for manufacturing

The common commercial lasers for materials processing include CO2 laser, Nd: YAG laser, fiber laser. Diode lasers are based on semiconductors (e.g., GaAlAs, InGaP, etc.) and emit light beam over a spectral range of 375nm to 1600nm wavelength depending on the semiconductor compound material used; the main industrial application of diode lasers is pumping of other solid-state lasers, but they are increasingly also being directly used in materials processing applications. Commercial lasers compete in the materials processing marketplace regarding their operating wavelengths, maximum available output power, efficiency, technological improvements and designs, and new application prospects.

One of the gas lasers that use gas as amplifying medium inside the laser cavity, the CO2 laser, emits far-infrared laser radiation of 10.6 μm wavelength. It has overall efficiencies of up to 30%. The different designs of the CO2 laser – transverse flow (cross-flow) laser, fast-axial flow laser, diffusion-cooled slab laser, and sealed-off laser use different modes of gas flow and cooling and different discharge orientations electric field, and gas pressure levels. This enables effective CO2 laser beam outputs over a wide range of output power in CW mode or pulsed mode. The output power level that can reach tens of kW and the beam quality of the CO2 laser is favorable for thin to thick section metal cutting and welding applications (Whitehouse, 1993; Anon, 2003, 2005; and Ready and Farson, 2001).

The Nd: YAG laser is a solid-state laser consisting of a single synthetic crystal of yttrium-aluminum-garnet (YAG) doped with a low percentage of the rare earth neodymium (Nd3+) ion and emits near-infrared laser radiation at a wavelength of 1.064 μm. Unlike CO2 laser, the output beam quality of the Nd: YAG laser can be affected by the thermal lensing effects caused by variation in the optical characteristics of the YAG crystal rod with increasing output power which limits the output beam quality at high power levels. Nevertheless, the Nd: YAG laser finds wide application in sheet metal cutting of complex geometries, especially in highly reflective sheet materials (Whitehouse, 1993; Kugler, 2001; and Ready and Farson, 2001).

Most fiber lasers are based on Master Oscillator Power Amplifier (MOPA) architecture, namely an oscillator followed by several amplification stages. Fiber lasers can operate both in continuous or pulsed operation. The laser oscillator medium is typically comprised of an optical fiber doped by active ions. The choice of the ions defines the wavelength of the laser. For instance, Ytterbium (Yb3+) is chosen to emit around the 1µm region, Erbium (Er3+) emits around 1.55µm, and Thulium (Tm3+) emits around 2µm.

The cavity mirrors are obtained by engraving Bragg gratings inside the core of the fiber. So there is no free space propagation, and the laser cavity is always aligned. The repetition rate of the laser is related to the cavity length of the oscillator. Using specific double-clad optical fiber coupled to a fibered combiner, a very high level of pumping absorption is reached (up to 50% in the amplifiers stages).

There are several advantages to the use of fiber laser:

The different laser technologies yield a large range of laser beam characteristics such as wavelength, pulse duration, energy and power, beam quality, pulse shaping, which allow adapting the laser tool to a large range of micro-machining. The possibilities offered with laser equipment for micro-machining are increasing, with the recent processes of surface structuration which have a huge potential.