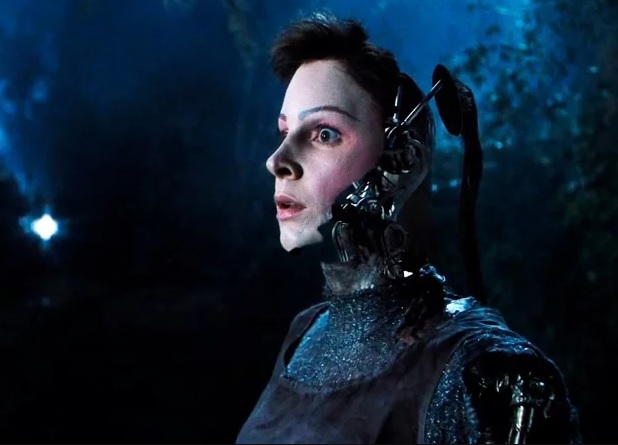 When we look at the history of science fiction and science, especially artificial intelligence and robotics, we can see that they are very interconnected. New inventions inspired the sci-fi authors, whose works inturn inspired scientists to invent the things that the sci-fi authors envisioned. There are plenty of films that had a robot or AI as a central figure in the plot. This post will look at a list of top 14 Hollywood movies, which probably contains the most exciting and promising stories for AI and robotics.

2001: A Space Odyssey is a mind-bending sci-fi masterpiece produced and directed by Stanley Kubrick in 1968. The movie was inspired by Arthur C. Clarke’s short story “The Sentinel.” The most famous AI movie in history, the film is renowned for its remarkably accurate forecast of the future, including spaceflight, computer interactions, etc. The film follows a trip to “Jupiter and Beyond the Infinite” by Discovery One with the sentient computer HAL 9000. HAL is responsible for most of the craft’s operations, but its programming has a glitch, and he is determined to destroy the world. When Dave tries to change HAL, we hear the cold words, “I am sorry Dave,” which are now iconic and are a warning that computers can take over humans. The film focuses on existentialism, human evolution, technology, artificial intelligence, and the possibility of alien life.

AI. Artificial Intelligence is an American science fiction directed by Steven Spielberg. It is loosely based on the 1969 short story “Supertoys Last All Summer Long” and set in a futuristic post-climate change society. The film tells the story of David, a child-like android uniquely programmed with human emotions. After his adoptive parents abandon him, he sets out to become a real boy. It is the first movie to use computer animated Pre-Vis. The film was initially titled “AI,” but a survey revealed that people thought it was A1. So, the makers changed the title to AI. Before the movie’s release, Steven Spielberg assigned video game developers to develop a series of games based on this movie for Xbox.

The best example of neo-noir cinema, Blade Runner is a sci-fi directed by visionary director Ridley Scott. The film was inspired by the novel “Do Androids Dream of Electric Sheep?” and set in a dystopian future Los Angeles in 2019. The story follows a world-weary cop whose job involves hunting down synthetic humans called replicants, engineered by the powerful Tyrell Corporation with a life span of four years. They have false memories that make them believe that they indeed are human. Though the film underperformed in the initial days, it became an acclaimed cult film to be called as an all-time best science fiction film. The film later influenced many science fictions, video games, anime, and television series. Notably, a sequel hit the theaters in 2017 as Blade Runner 2049.

Bicentennial Man is an American science fiction comedy-drama film, based on the novel “The Positronic Man”. It has Robin Williams starring as Andrew, a robot programmed for domestic chores and sold to an upper-middle-class family. The family recognizes and encourages Andrew’s unique characteristics, particularly his artistic streak, sensitivity to beauty, humor, and independence of spirit. In so doing, he sets Williams’s tin man on a two-century journey to become more human than most human beings. Directed by Chris Columbus, the film explores issues of humanity, slavery, prejudice, maturity, intellectual freedom, conformity, sex, love, and mortality.

Alex Garland’s directorial debut Ex Machina is a 2014 British psychological science fiction. It is a stunning example of sci-fi storytelling, hailed “the best movie about artificial intelligence in 40 years.” The film follows a young coder, selected to spend a week evaluating an AI that can mimic humans. As he gets to know the beautiful robot Ava, complicated questions arise over her qualities to be like a human.

Her is an American science-fiction romantic drama film by Spike Jonze. The film follows a writer, who is quite lonely until he develops a relationship with an AI virtual assistant, personified through a female voice. Jonze reportedly got the idea of the film in the early 2000s when he heard about a website that offered a chatting capability with an artificial intelligence program.

I, Robot is a science fiction action film, directed by Alex Proyas and written by sci-fi writer Isaac Asimov. The film narrates the story of a Chicago policeman who investigates the death of a robotics professor. He is suspicious that one of his servant robots, named Sonny, may have a role in the professor’s death.

Metropolis is a German expressionist science-fiction drama from director Fritz Lang. Regarded as the first feature-length science-fiction movie, it served as the foundation for a variety of movies that followed, including Blade Runner and Superman. Set in a backdrop of futuristic urban dystopia, Metropolis follows the attempts of Freder, a wealthy son of the city master, and Maria, a saintly figure to the workers. They want to overcome the vast gulf separating the classes in their city and bring the workers together with Joh Fredersen, the city master.

RoboCop is a cyberpunk action film, directed by Paul Verhoeven and set in the backdrop of crime-ridden Detroit. It is the story of a police officer, who is murdered by a gang of criminals and but revived by the megacorporation Omni Consumer Products (OCP) as a superhuman cyborg law enforcer, known as RoboCop. It was inspired by “Judge Dredd” and “Blade Runner.”

The Terminator is an American cyberpunk franchise, depicting the battles between Skynet’s synthetic intelligent machine network and John Connor’s Resistance forces, supported by the human race. Skynet has many terminator models, such as the T-800, which has a metal endoskeleton with a living tissue covering. Designed for infiltration and combat, he is sent backward in time on a mission to murder Sarah Connor, years before she gives birth to her son John Connor, who would later become the savior of all humankind.

The Machine is a British science-fiction thriller, directed by Caradog W. James. The plot centers around two computer programmers who create a self-aware artificial intelligence for the Ministry of Defense with impressive abilities. The machine was intended to become a super-soldier, but things go wrong when the British government authories steal their work and turn it into a robotic weapon.

The Matrix is another science fiction action film and the first installment in Matrix franchise. It showcases a dystopian future where humanity is trapped inside a simulated reality called the Matrix. Artificial intelligence has created the Matrix to distract humans while using their bodies as an energy source. When computer programmer Thomas Anderson uncovers the truth, he starts a rebellion against the machines along with others, saved from the Matrix.

The Day the Earth Stood Still is black-and-white science fiction by Robert Wise. Based on a 1940 science fiction short story “Farewell to the Master”, it was one among the most frightening science films in the 50s. The film follows the story of a humanoid alien visitor named Klaatu that comes to Earth. Accompanied by a powerful eight-foot tall robot named Gort, he delivers a message to mankind that they must learn to live in peace. Or they will be destroyed because they are a danger to the other planets in the universe. When humans refuse to listen and sequester Klaatu, Gort automatically activates and begins to take action against the world.

WALL-E is a 2008 American computer-animated science-fiction by Pixar Animation Studios and Walt Disney. It follows a single trash compactor robot in a future, uninhabitable, deserted Earth, left to clean up garbage. When a probe robot called EVE, sent by the starship Axiom, visits him, he falls in love and pursues her across the galaxies.