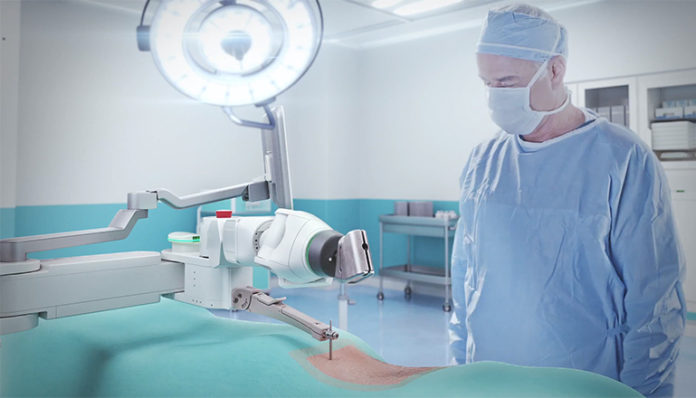 Surgical robotics is a fascinating interdisciplinary field of medical engineering, transforming global healthcare by pushing the frontiers of innovation towards improved clinical outcomes.

The advantages offered by surgical robots may be grouped into three areas. The first is the potential to significantly improve surgeons’ technical capability to perform procedures by exploiting humans’ complementary strengths.

Second, the robots can be constructed to be more precise and geometrically accurate than an unaided human. They can operate in hostile radiological environments and can provide great dexterity for minimally invasive procedures inside the patient’s body.

These capabilities can enhance an average surgeon’s ability to perform procedures that only a few exceptionally gifted surgeons can perform unassisted and can also make it possible to perform interventions that would otherwise be completely infeasible.

The Invendoscopy E210 system is a flexible self-propelling colonoscope capable of following the colon’s loops while avoiding the bowel’s excessive stretching. The system contains a single-use sterile colonoscope with an insertion length of 170 cm. The tip can be deflected 180 degrees in any direction and comprises a bending radius of 35 mm.

The HD camera is equipped with three white-light LEDs and a complementary metal-oxide-semiconductor (CMOS)-imaging chip. The graphical user interface supplies the video signal transmission, enabling the operator to control its functions, using a handheld controller (Invendo ScopeController). The joystick on the handheld unit can detach, allowing the operator to control the camera functions with one hand.

The Invendoscopy E210 system has an ergonomic and lightweight design that reduces the functional burden placed on the operator. The colonoscope’s single-use nature offers an advantage, especially in locations where reprocessing methods are less than ideal. The system also increases the safety of procedures by reducing collateral tissue damage in difficult areas, thereby decreasing the need for sedation.

The NeoGuide Endoscopy System by Intuitive Surgical is a colonoscope that uses a computer-aided mapping system to trace the lumen of the colon, with applications in lower GI endoscopy and interventions. The system consists of 16 equally sized electromechanically controlled segments connected successively. The system has two modes — active and passive.

In the active mode, the operator’s commands are relayed via an actuation controller, which allows each segment to be automatically articulated as it moves through the colon. This was described as a “follow-the-leader” type movement, as the colon and its flexures are navigated by the scope.

The scope exhibits a similar stiffness, shape, and functionality to a standard scope in the passive mode. An internal position sensor is present on the device’s tip to measure the operator’s commands, and an external position sensor measures its insertion depth. Using a programmable over-tube enables the system to prevent the reformation of colonic loops once endoscopically reduced.

Compared to other systems, the NeoGuide Endoscopy System has several advantages. The real-time computerized mapping system results in less force applied to the colon’s walls and improved identification of pathological anomalies). Like the Invendoscopy E210, NeoGuide applies less force to the colon wall to significantly reduce the colonic looping phenomena responsible for 90% of painful episodes following a colonoscopy. This makes it possible to perform a colonoscopy without sedation.

The Flex robotic system by Medrobotics is a flexible highly-articulated robotic platform intended to increase accessibility to organs deep within the body. The system has been primarily used in transoral procedures, but recent researches demonstrate its feasibility in rectal cancer resection.

The endoscope on the Flex robotic system consists of several adjacent segments with cables passing through the endoscope, producing variable states of semi-rigidity or flexibility by modulating cable tension. Two sets of segments are assembled to form an inner and an outer portion of the endoscope.

There are six light-emitting diodes located at the camera’s tip for illumination, and an additional zoom function allows for magnification as needed. There are two lumens within the endoscope — one for electrical connection and the other for irrigation. Two External Accessory Channels (EAC) allow for the exchange of compatible flexible instruments during a procedure. The operator can control the endoscope via a single-port control and a joystick with visual feedback projected onto a two-dimensional visual display.

The Single Port Orifice Robotic Technology (SPORT) Surgical System by Titan Medical is a console-based, robotic platform for laparoendoscopic single-port surgery (LESS). It utilizes two articulating instruments with replaceable single-use tips attached to a single-arm mobile patient cart. The system’s collapsible design allows it to be inserted into the body cavity through a single 25-mm incision. The robot is controlled remotely with 3DHD endoscopic images displayed on an HD flat-screen monitor.

Equipped with hand controllers and foot pedals, an ergonomic workstation allows the operator to control the robot’s movement. The SPORT system comes with a diverse array of MIS applications. Compared to other small surgical systems, it performs complex surgical maneuvers through an interface that mimics the lager MIS robots.

Miniature in vivo robot (MIVR), developed by Virtual Incision and CAST, is a small robotic surgical platform with applications in several procedures.

This robotic system has two arms with several miniature effectors —such as graspers and a monopolar electrocautery hook—that are interchangeable and inserted into the peritoneum without any limitations. Each arm has multiple joints that allow for greater functionality during surgical procedures. The arms and the platform’s body can fit into a single incision in the body cavity. The small size of the MIVR allows it greater access inside the peritoneal cavity and enables it to be repositioned easily, allowing it multi quadrant access.

Miniaturized robotic surgical systems can enhance laparoscopic surgery and overcome some of its current limitations. The miniaturized motors driving the robotic arms eliminating the need for large motors and pulleys seen in other systems are key technological advances in developing the MIVR. This feature increases patient access relative to more extensive robotic surgical procedures and allows for a reduced footprint.