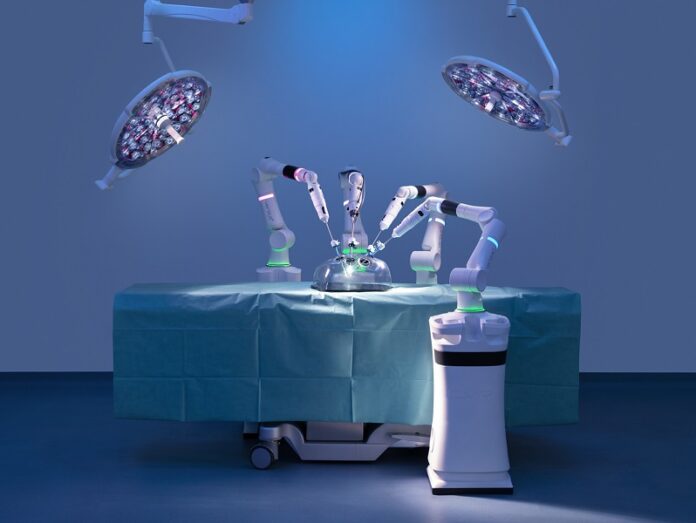 The introduction of minimally invasive surgery (MIS) some 20 years ago marked a milestone in operative medicine. Since then, it has made tremendous progress in a relatively short period, realizing improvements for both the patient and surgeon.

It resulted in reduced tissue trauma, allowing quicker recovery and early reintegration into the patients’ normal social and working processes. Although minimally invasive surgery is well established in general surgery, its routine application is still restricted to technically relatively simple surgical procedures, such as cholecystectomies, fundoplications, pulmonary wedge resections, and all kinds of hernia repairs.

But further developments in the fields of computer technology, micromechanics, and data transfer have recently led to the implementation of robotic surgical systems, which have raised hopes of overcoming the limitations of conventional minimally invasive surgery and thus throwing it open to more surgeons and procedures.

Versius, developed by CMR Surgical in the UK, offers a novel modular system design for a variety of uses in gynecological, colorectal, renal, head and neck, and upper gastrointestinal (GI) MIS.

The individualized robotic arms offer laparoscopic instruments for reduced incision sizes at smaller sizes (down to 5 mm), and the arms can move with 7 DOF. The arms are each mounted onto individual surgical carts, allowing for more versatile robotic approach incision sites.

Versius’s master console is an open-format with 3D-HD visualization from an endoscopic camera driven by robotic arms. The Versius joystick controllers have hepatic feedback. One unique feature of the Versius system is the ability of a surgeon to stand at the console, which expands the ergonomics of the system to suit the individual preferences of the surgeon.

The SurgiBotTM is developed by TransEnterix that produces the Senhance robot. This system consists of a minimally invasive operating arm on the patient side and a 3D-HD visualization cart, which is also placed on the patient’s bedside. SurgiBot aims to provide underserved populations with single-port capacity surgical robots for a significantly lower cost. The system allows surgeons to control flexible instruments that are inserted via a single incision site.

The SurgiBot platform was built on the Single-Port Delivery Instrument Extended Research (SPIDER) system approved by the FDA in 2009. SPIDER employs four channels that gain umbilical access into the abdominal cavity within a single port. Two of the channels are static, and two channels are flexible, allowing the operation of both a camera and tools through one port. Instruments are guided into the abdominal cavity utilizing device delivery tubes (IDTs).

MiroSurge is a telemanipulated robotic system for MIS. Developed by the DLR Institute of Robotics and Mechatronics, Weßling, Germany, this platform consists of a 3 to 5 individually mounted minimally invasive robotic-assisted (MIRO) arms height-adjustable 3D display, and a console for surgeons (Figure 4). The DLR MIRO is a fully torque-controlled, low-weight, robotic arm. A variable number of MIRO arms, from 3 to 5, can be used in different combinations allowing to customize to the preferences of a procedure or surgeon. Each MIRO arm moves with 7 DOFs, with additional DOF available using wristed instruments compatible.

The console of the surgeon is similar in its open format to other modalities, but it offers two visual modes uniquely. The first is bimanual haptic interaction, where forces, similar to other robotic models, are transmitted into telemanipulators. The second is where optically tracked forceps are held in a surgeon’s hands, and increased stereo images show strengths through constantly updated force vectors.

The MIRO arms come with self-contained sensors of torque and position, which relay information to the sigma. 7 Haptic device, the hepatic feedback system of the DLR, where force information is both displayed on the console of the surgeon and relayed to forces within the telemanipulators.

DLR has also explored ultrasonography for quasi-tactile vessel identification within a surgical field as an additional instrument compatible with the MiroSurge system. The MIRO arms themselves are unique in their ability to be mounted to a surgical table, so they do not require additional carts or space to employ the system. Table-mounting makes this system the smallest multi-port MIS robotic modality currently under development and lays out the blueprint for further robotic platform miniaturization.

STRAS includes a cable-driven system for moving the endoscopic camera and the related flexible instrumentation. Table-mounted positioning arms hold each module, and the modules allow 10 DOF in motion. Tele manipulated open-format master console allows for controlling all axes of motion from a single console (contrast to MASTER that requires two consoles).

Some major advantages of this system are its considerably smaller size than comparable LESS robotic platforms. Practical table mounting arms and single port options enable the STRAS to be quickly set up and applied, translating into shorter OR times and reduced costs. The STRAS is significantly smaller compared to other single-port systems and can be feasibly used by many hospitals for a wide variety of procedures.