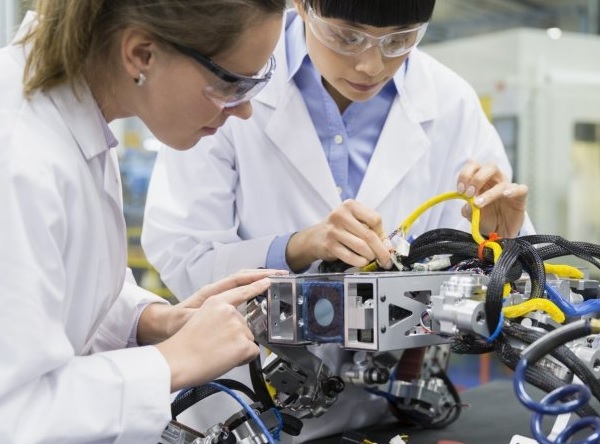 Sweden is home to some of the top robotics companies, including ABB Robotics, IBC Robotics, Robotdalen, Giraff, Robot System SR, and SRC.

When it comes to robot adoption, Sweden is a European heavyweight, like Germany, and it is partly due to its automotive industry led by automakers like Volvo.

According to a 2017 survey by the European Commission, 80 percent of Swedes welcome robots and AI, and Swedish trade unions openly embrace automation. Sweden even has job security councils that help workers to pursue new roles if they are affected by robots.

RobotLab for Productive Robotics at Lund University creates solutions that make robots productive also for smaller players in industry and development, based on scientific advancements in sensing, control, actuation, interaction, mechatronics, and software architectures. The researchers at the lab bridge the gap between service robotics and industrial robotics, by enhanced system integration techniques, by more generic sensor-based motion control, by adapting reasoning and knowledge representation to industrial contexts, and by a novel combination of existing approaches in research and industry.

RobotLab builds generic semantic components within natural language processing, with a focus on scalability for large corpora aiming at robots with maintained knowledge from millions of documents. It also find new principles for how to efficiently build robots/systems with human-friendly interaction for defining robot tasks and the implied computing and show how to organize open robot control systems, built around industrially available robots, and support experimental verification of these principles and well as open control for new applications.

The researchers apply semantic techniques in robotics and automation, to facilitate high-level interfacing and to better support human-robot interaction. Combining semantic technologies with solutions for industrial automation, into what can be called semantic systems, also connects to the area of feedback control.

The Center for Applied Autonomous Sensor Systems (AASS) at Örebro University was founded in 1996. AASS employs researchers and Ph.D. students with a wide range of complementary competencies in robotics and artificial intelligence. Internationally recognized for its research in mobile robot olfaction, AASS is the national leader in field robotics and robotics for the elderly.

80% of AASS research is funded by the European Commission and significant Swedish funding bodies such as The Swedish Research Council, The Knowledge Foundation, as well as private Swedish companies and public authorities. AASS performs multidisciplinary research on autonomous systems with a focus on their perceptual and cognitive capabilities and their integration. The main application areas are field robotics, robotic technologies for the elderly, and environmental monitoring.

In olfactory perception, the team studies open gas-sampling principles and techniques. By combining this type of artificial olfaction and mobile robotics, they develop the foundations for mobile-robot olfaction and apply it to environmental inspection and monitoring. The application domains include gas sensor networks and mobile robots for surveillance of landfill sites, monitoring of air pollution and gas leak detection, and localization.

Centre for Autonomous Systems (CAS) at Swedish Royal Institute of Technology (KTH), a leading technical university in Sweden with research in a broad range of topics ranging from natural sciences to all branches of technology, was founded in Stockholm in 1996. CAS bridges three KTH schools – Computer Science and Communication, Electrical Engineering, and Engineering Sciences. The center performs research in collaborative and autonomous robot systems, and the researched spans the areas of robotics, computer vision, machine learning, and control.

The center contributes to scientific and industrial communities while also having a clear social dimension, providing technologies that increase life quality. An important objective of several ongoing projects is the development of robotic systems for dual-arm object manipulation based on visual, range, and haptic information. It addresses three research problems: 1. Task learning based on observation of human examples, 2. A multi-agent control theoretic approach for dual-arm manipulation, 3. Sensors and system integration. The projects are primarily interested in developing the necessary theoretical frameworks for flexible and robust systems performing in realistic environments.

Swedish Maritime Robotics Centre (SMaRC) is a national cross-disciplinary industrial research center for maritime robotics. It performs research on, and demonstrate, solutions that can contribute to the transition to autonomous intelligent underwater systems, with a mission to change the undersea domain.

The center focuses on four research disciplines – autonomy, endurance, perception, and communication – intending to develop next-gen maritime robotics for ocean production, safeguarding society, and environmental sensing. The projects are funded by the Swedish Foundation for Strategic Research and other partners.