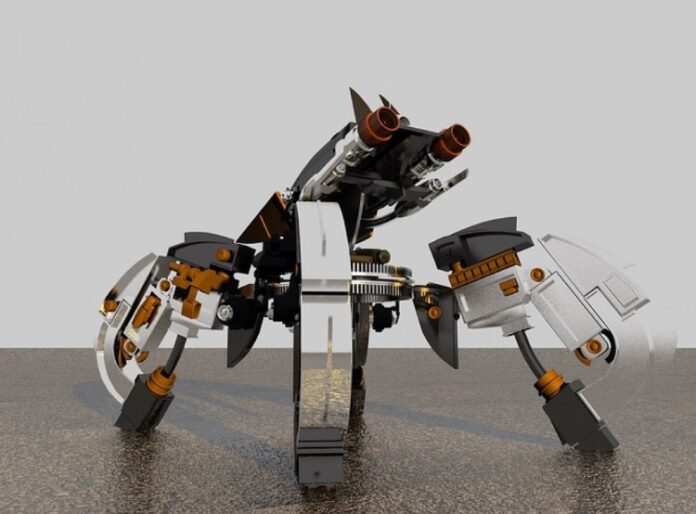 The Raspberry Pi is the undisputed heavyweight champion in the world of single-board computers (SBC). The current version Raspberry Pi Model 4 B was released in June 2019, and more than 30 million units were sold in just six months.

Perhaps, the Raspberry Pi isn’t the most powerful, or the most compact robotics SBC on the planet, yet the bet-known board money can buy. It is one of the most popular or most mainstream single board computers out there.

Best suited for an entirely do-it-yourself (DIY) design, Raspberry Pi board is an excellent choice for building your robot projects. It is affordable and has superior hardware and software compatibility, lots of models, and off-the-shelf robotics kits to pick from. Thanks to a massive Raspberry Pi user base, you can find a ton of tutorials, explaining how to use a Raspberry Pi as a buggy, competition-ready robot, or another similar project.

In this post, we will look at the top five best selling Raspberry Pi Robot Kits in 2021.

The PiCar-V is an open-source robot learning kit based on Raspberry Pi. It is a perfect robot kit for high-school-age and above budding robot enthusiasts, serious robotics experimenters, and anybody who already has their software – but needs a hardware platform to run it on. Once set up, kids as young as five can quickly drive it around using the remote-control smartphone app! 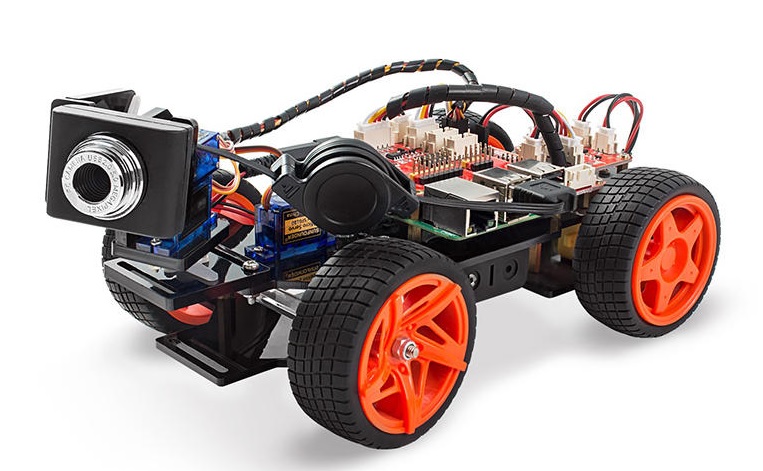 Compatible with RPi 4B/3B/3B+/2B/2B+, the PiCar-V is equipped with a wide-angle USB webcam and is powerful together with three whole new circuit boards and less but simpler wiring. Python code is provided with the car, and you can program and debug it with Dragit, a Snap-based graphical interface by simply dragging and dropping the code blocks for complex functions.

You can control the robot remotely in many ways either through the app on PC/OS, relevant code, or a web browser from mobile phones, tablets, etc. The constructor plates in a well-designed structure, reliable, durable, and shatterproof.

Yahboom Raspberry Pi 4WD Smart Robot is another best-selling Robot Kit, specially designed for educators, students, and Raspberry Pi enthusiasts. Similar to other smart robots, most of the components are connected with screws, copper pillar, and anti-reverse socket.

You can gain two degrees of freedom with the latest Raspberry Pi 4B board as the core controller and HD Camera and set up the real-time transmission of HD video through the 5G WIFI network. You can create plenty of possibilities with the robot by adding various sensor modules, communication modules, and even a mouse and keyboard to form a microcomputer. Users can learn about the robot car and the Raspberry Pi 4B/3B+ development board from the resources provided with the robot kit. 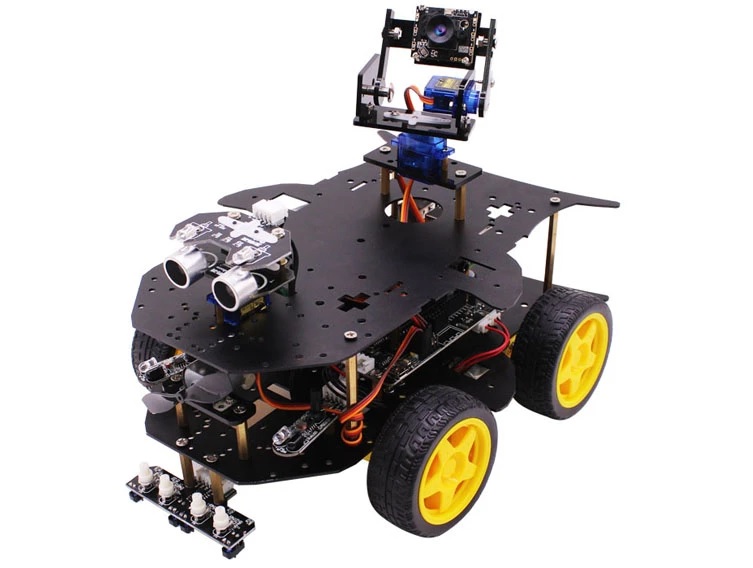 Freenove Raspberry Pi 4WD Smart Car Kit is a great STEM robotics kit, if you are interested in programming with a standard language like Python, instead of proprietary block-based languages that many other kits use. It’s easy for Raspberry Pi beginner to program this car with Python! You can import codes from the library and can simplify start programming.

Compatible with Raspberry Pi 4B / 3B+ / 3B, the kit allows you to get started with robotic development like face tracking, line tracking, light tracing, obstacle avoidance, and manual control. 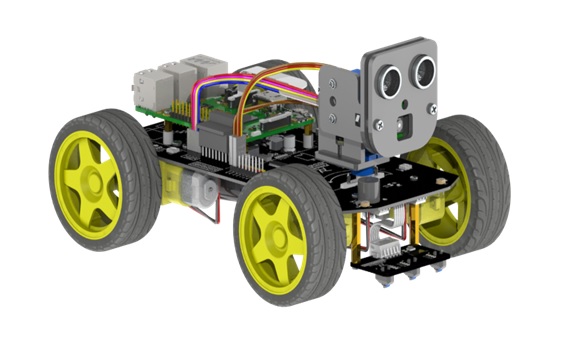 The camera can recognize your face and can move with the face. The car’s obstacle avoidance function mainly uses the HC-SR04 ultrasonic module, which is installed with the servo. The ultrasonic module measures the obstacle distance on the left, middle, and right directions. The car performs corresponding actions according to different distances.

The line tracking function of the car mainly uses infrared sensors. When the sensors detect the black line, the corresponding led will light up. The car’s light-tracing function primarily uses two photoresistors located at two sides of the front end to detect light. According to the change of voltage detected by the sensors, make the car perform corresponding actions.

The GoPiGo is a complete kit perfect for schools, maker spaces, camps, and robotics enthusiasts! It lets you learn to code with Bloxter or Scratch, visual coding languages, or use Interactive Python for advanced programming capabilities.

It’s a full robot chassis and is compatible with Raspberry Pi Models A, B, B+, 2, and 3. You can customize your GoPiGo by adding additional servos, a Raspberry Pi camera, or other sensors, giving you a unique hardware and software experience. Motors on the GoPiGo3 have built-in encoders to provide a precise and accurate motor control. This robot drives straight every time. 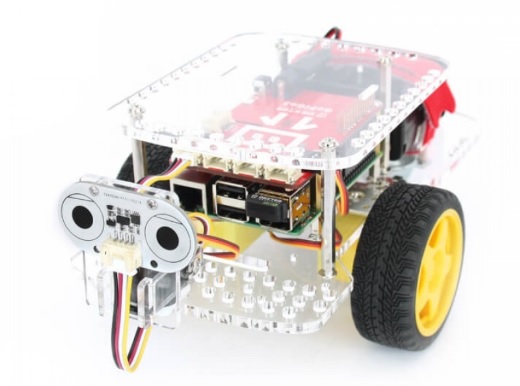 Dozens of built-in lessons about sensors and basics of programming make it easy to get started with learning how to program your GoPiGo. DexterOS broadcasts a WiFi signal that connects directly to your device. You can also access the software through a web browser — nothing to download or install, making it an excellent fit for beginners & classrooms!

AlphaBot Raspberry Pi Robot Building Starter Kit comes with AlphaBot robotic platform, which includes line tracking, speed measuring, obstacle avoidance, IR control, and a camera (with servo and 2 DOF pan head). With modules in the kit, you can quickly get started with robotic development like line tracking, obstacle avoidance, IR remote control, video monitoring via a network, etc. Thanks to the rich Raspberry Pi open-source resources, and the modular design of AlphaBot, you can learn how to extend, refit, and build your own Raspberry Pi robot. 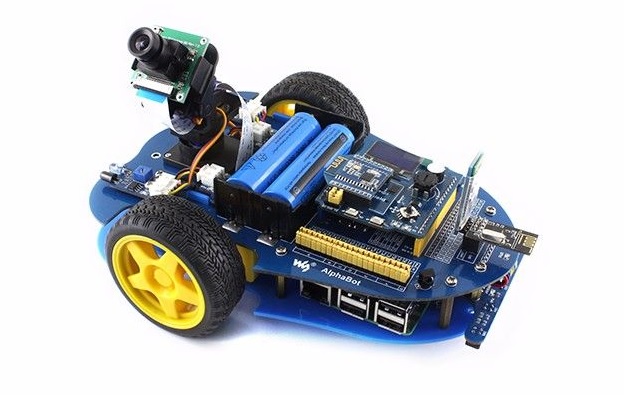