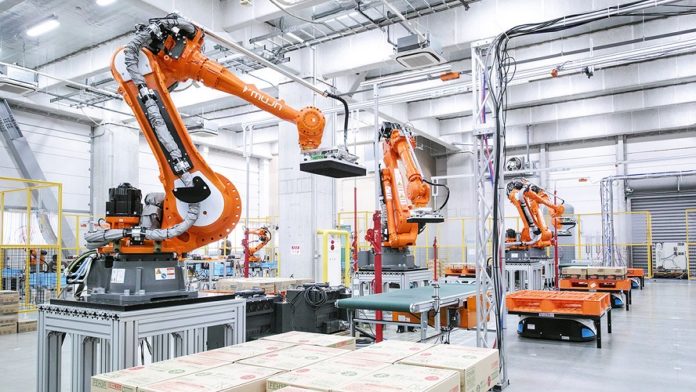 Lifting heavy boxes is probably the most challenging task in warehouse logistics. There are a lot of companies looking for truck unloading systems. Luckily, a Japanese start-up is very close to commercializing this vision.

Last year, a technology show in Tokyo had a giant robot arm reaching into a full-size mock-up of a shipping container and unloading boxes from it. It was set up on a platform that moved back and forth, performing all jobs usually done by warehouse workers and forklift operators. The robot arm was powered by an industrial robot controller developed by Mujin to fully automate warehouses and filling centers.

How does it do it? Mujin builds robot controllers and camera systems, integrated into existing industrial robot arms. These controllers of the size of a briefcase— one for motion planning and one for vision— are acting as an operating system capable of controlling the hardware of any robot manufacturer. If a goal, such as capturing an object, is entered, the controllers can automatically generate robot movements, eliminating the traditional need to manually “teach” robots.

The Mujin controller can recognize the target object in 3D, using this information in real-time to plan the appropriate robot motion that performs the task precisely. The result is an intelligent pick-up system that does not require traditional, cumbersome teaching and learning systems to be programmed. In short, Mujin’s technology, based on motion planning and computer vision, makes any industrial robot capable of acting independently and intelligently.

Spun from Tokyo University, Mujin aims to be a leader in automated logistics processes. It has created the world’s first fully automatic e-commerce warehouse, equipped with Mujin robots, for the Chinese e-commerce giant JD.com.

The 40,000-sq-m facility in Shanghai began operation in June. It was equipped with 20 industrial robots for collecting, transferring and packing using crates on conveyor belts, camera systems and Mujin robot controllers. Instead of the usual number of 400 to 500 workers, only five is needed to run a warehouse of that size. And their job is only to service machines, not to run operations.