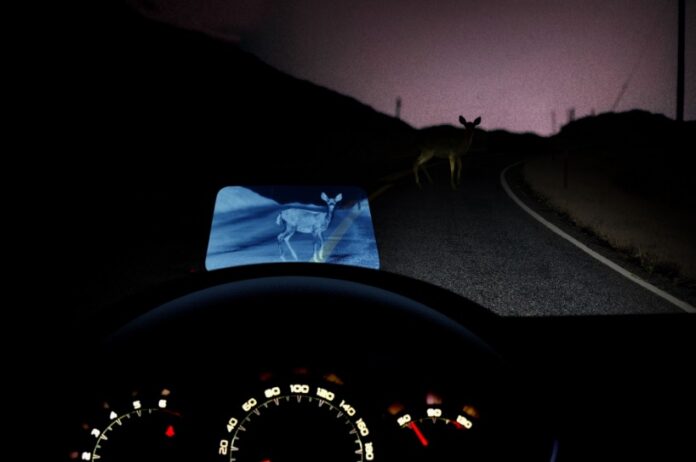 Poor visibility during night driving is a major cause of tragic accidents on our roads. At night, even with standard high-beam headlights on, visibility is limited to about 250 feet, creating less time to react to animals and pedestrians in the road, especially when driving at higher speeds.

According to the Connecticut Department of Transportation statistics, nearly 52,000 accidents occur per year due to poor visibility conditions, accompanied by the lack of depth perception, color recognition, and peripheral vision in the dark. That is why some car manufacturers introduced night vision systems (NVS), though as optional equipment, on certain premium vehicles to increase the visibility of roads in nighttime traffic.

A night vision system provides the driver with the black-and-white image of the driving environment ahead of the vehicle in a central information display (CID). The objects ahead of the car are shown in varying degrees of the brightness depending upon the temperature of these objects, enabling the driver to detect in good time heat-emitting objects such as peoples, animals, and other vehicles.

Unlike other technologies, such as, e.g., light amplification which needs at least a small amount of light to generate an image, thermal imaging requires no light. A thermal imaging camera produces a full image on which the smallest of the temperature difference can be seen. The thermal image is recorded with a far Infrared camera (FIR) via a special imaging sensor in the grill, which detects the infrared radiations in a specific wavelength range. A computer converts the data into an image that appears on the navigation display unit into the dashboard.

Warmer objects (pedestrians and animals) appear white; cooler objects (e.g., parked cars and detritus) appear black. As the car exceeds 25 mph, the system scans the road up to 100 yards ahead of the vehicle, specifically for pedestrians. A pedestrian appears with the yellow tint.

A night vision system consists of three main components: 1). thermal imaging camera, 2). night vision control unit, and 3). sensor system. The thermal imaging camera consists of a heated optical element and a thermal imaging sensor, made up of a multitude of sensor elements which is capable of generating an electrical signal as a function of the impinging intensity of heat radiation. The higher the temperature, the brighter the corresponding pixel will be. This heat radiation is converted into electrical signals based on the principle of a change in resistance.

The night vision control unit converts the symmetrical image data from the camera into a signal and, depending on the equipment specification, and makes this signal available to either the navigation system or the video module in the control display. The following are some of the key advantages of using the night vision system in cars.

The global NVS market, estimated to generate revenues of around $3 billion by 2024, is growing at a fast pace due to the growing demand for luxury vehicles, increased road safety concerns, the emergence of autonomous driving technology, developments in thermal imaging and decreasing prices of sensors.